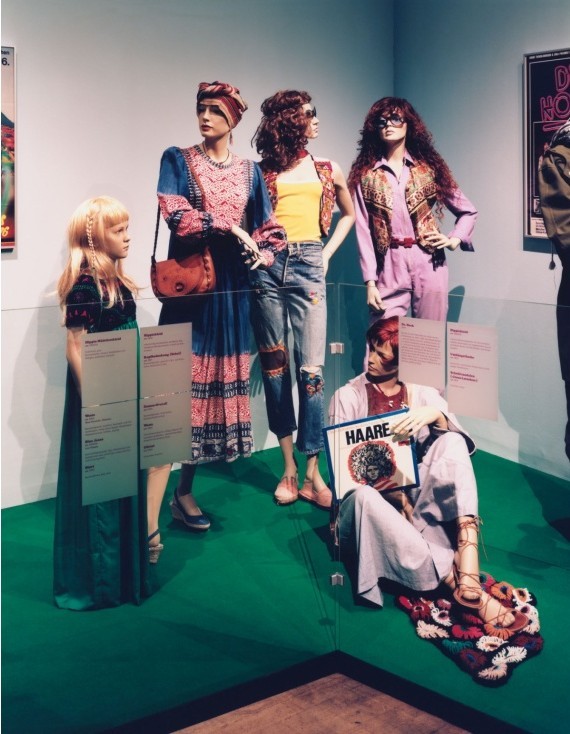 The Andrew Kreps Gallery is pleased to present Archive, its third solo show with Annette Kelm. Interested in typologies, models of mass production, the function of objects and the nature of their representation, stylistic developments in patterned textiles, design, and technology, Annette Kelm’s work conflates several genres in single images, or develop single motifs in series of images that combine a variety of artistic, historical, and cross-cultural references.

Kelm’s newest photographs belie an interest in cultural history based on her investigations of archives and institutional modes of representation. Three series of works form the exhibition: images of vitrines, taken in German museums, that capture the style of the 70s and 80s, images of pink overalls arranged in the artist’s studio, and photographs of white cloaks painted with protest slogans. All the works are tied to German feminist movements of the last 50 years.

Latzhose (Dungarees), 2014 are four works in which the photographed object is a pair of purple overalls arranged and displayed on the neutral, flat background of Kelm’s studio floor. In Germany during the 70’s overalls (dungarees) were perceived as typical men’s work wear, but female activists and their supporters dyed them purple - red conventionally stood for the female and blue for male, therefore purple was the color in between, ultimately becoming a symbol of women’s liberation. The myriad serial formal configurations of the item in Kelm’s photographs reinforce the overalls as a symbol – while also foregrounding the quotidian aspect of these socio-political signifiers that crowd our visual world.

The artist explores forms of protest developed by the actress, sociologist and activist Hannelore Mabry (1930-2013), who resided in Munich from 1966 until her death last year, as well as other members of the Neue Frauenbewegung (New Women’s Movement) in Germany. Intentionally deploying a direct and documentary-like style, the photographs depict Körperüberhänge (body cloaks), in the archive of Munich’s Institut für Zeitgeschichte (Institute for Contemporary History), which were worn during demonstrations. These robes and capes were made out of bed sheets and painted with large letters and bold political slogans. For Kelm they function as tropes for Mabry’s political agenda and legacy, as well as for the student rebellions of the 1960s, which mounted the struggle for women’s rights on an unprecedented scale.

Finally, a small group of photographs taken in history museums in Munich and Karlsruhe will be exhibited, which feature tableaus of the “style” of the 70s and 80s (including the overalls). These images question how these activist gestures and tropes are portrayed as curt and clichéd rather than complex political movements of their time.

She will have a solo show at the Museum of Contemporary Art in or Detroit, curated by Jens Hoffman, in 2016.
www.andrewkreps.com