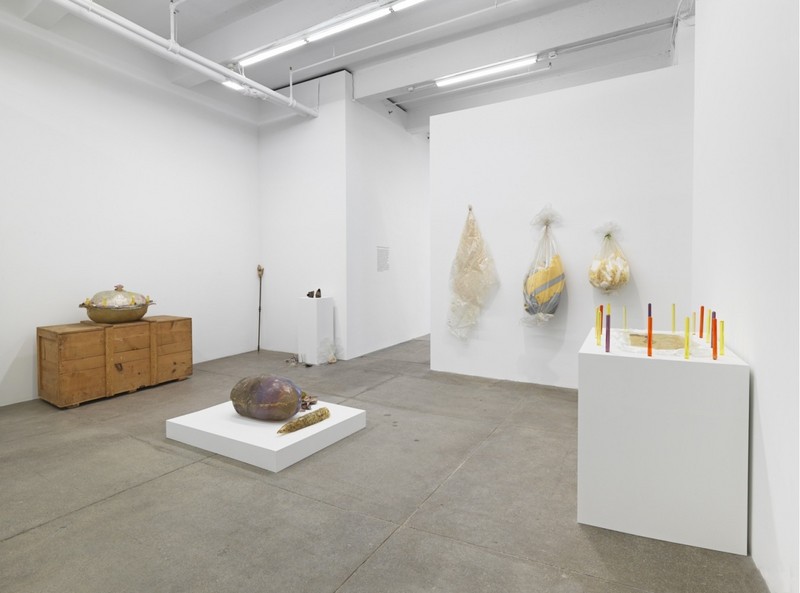 The Andrew Kreps Gallery is very pleased to announce its first solo exhibition with Los Angeles-based artist Barbara T. Smith. Critically known for being an innovator of West Coast performance art of the late 1960's and early 1970's, she was also a sustained contributor to the feminist movement. For over 35 years she has found personal transformation through unique rituals and performances characterized by prolonged engagement with spirituality and issues of gender and power. The works included in this exhibition share the medium of resin and span the years 1968 – 1993. Smith began to work with resin in her first large-scale sculpture, Field Piece in 1968 and consistently utilized it in her practice in myriad forms.

In the 1960s, Smith's conventional nuclear family life transitioned into a lifestyle consumed by art making. The exploration of autobiography and community via relations with her audience and peers became vital to Smith's art, exploring themes of the body, ritual, nurturing, sexuality, female desire, spiritual transformation, love and death. And this was taking place against the backdrop of the dominant patriarchal narrative evolving specifically in the Los Angeles art world – and in the world at large.

The Holy Squash, the first work one encounters in the exhibition is an installation comprised of a relic (the squash) and its reliquary (the mold) as well as other objects used in an eight-day durational performance that resulted in a Holy Squash ceremony – including baptism and mass. The performance brought together the themes so important to Smith: universal communion, spirituality, ritual, and meaningful interaction. And perhaps more importantly is the performance’s examination of the gender hegemony latent in the Judeo-Christian religious traditions by offering up a more female-centered alternative.

Adjacent to this work are the last existing elements of Field Piece, 1968/72 – a large-scale segment of an (infinite) field of grass. The work is made up of translucent resin “blades” that light up as viewers walk through them creating an almost synesthetic experience. Upending the conventional dichotomy of performer and viewer (as she did with so many of her performances), Smith asked the audience to actively take part in their own experience of the work.

While working on Field Piece Smith utilized the extra resin from the process to create clear-cast resin spheres and other ceremonial objects to form a magical collection in an old trunk displayed open on an oriental rug. She began by creating artifacts from the process of making another work she ended with a magic carpet trunk, or dowry, treasures and their stories.

“[So] resin and fiberglass has been a material of transparency, and light also a material of strength and versatility. It protects and preserves sacred objects. It is difficult and dangerous to work with both because of fumes and the danger of fire. The catalyst and acetone are highly inflammable. The edges of fiber glassed pieces are sharp and can cut you, and if thin will break. Because of the dangers of working with resin it is not so readily availably now. It is messy and stinks of a strange almond smell, sometimes if not quite properly catalyzed, never completely cures.”

Smith’s work was included in the following exhibitions: Out of Action: Between the Performance and Object, 1949-1979, Los Angeles, 1955-1985: The Birth of an Art Capitol, WACK!: Art and the Feminist Revolution, which traveled extensively including shows at PS1, New York and Pompidou, Paris, Installations Inside/Out: 20th Anniversary Exhibition, The Armory Center for the Arts Pasadena, CA, and the Pacific Standard Time exhibitions in Southern California in 2011 including The State of Mind, Orange County Museum of Art, and Under the Big Black Sun at MOCA/LA, as well as a one-person show The Radicalization of a 1950’s Housewife at UC Irvine.
www.andrewkreps.com