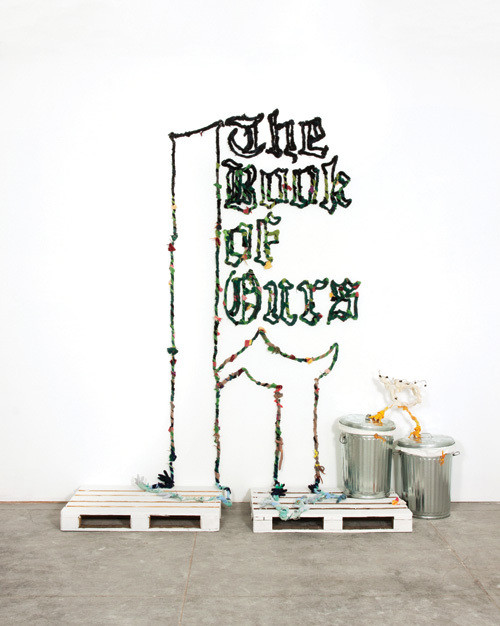 The Andrew Kreps gallery is pleased to present The Book of Hours, Christian Holstad’s first solo exhibition with the gallery, which will feature sculpture, installation and drawings in an immersive installation. Enhanced by sound works by Martin Maugeais the show takes as its point of departure the religious devotionals of the same name.

Books of Hours are often characterized as the “bestseller” of the Middle Ages. The most famous of these religious books were richly decorated with gilding and inks made with pigments of ground precious stones. These books were commissioned by the upper class and were meant to occupy ones time absorbing the reader in the rich and layered visual illustrations of the texts of Christianity. They were named for the time spent pouring through them perhaps in the same way a reader might pour over a morning newspaper. Both documents act as a snapshot of the time in which they were created but differ in their purpose. The Book of Hours promotes the rejection and/or suppression of natural desires as a path of religious enlightenment. In contrast, it could be seen that a contemporary newspaper is filled with stories that are the result of this same rejection of nature that have ultimately lead to spiritual erasure and ecological degradation.

Mirroring street scenes around him through inexplicably crafted soft sculptures Christian depicts this disconnect from nature in a contemporary capitalist society. Discarded diapers both infant and adult lay discarded in a corner with an abandoned stroller - a tree stump emerging from a cobblestoned patch of dirt is hovered over by it’s own amputated trunk grown through an electrical wire and hordes of bees crashing out of the sky in a death fall present the perversity of our contemporary reality with harrowing beauty.

It is this beauty – and the process of the creation of the hand-made environments and their respective monsters that give some accidental hope to these scenes with piles of feces topped with shrimp lovingly sewn of millinery thread and sequins. Sounds of harpsichord and organ emanate from within - the chords of which are derived from the accidental aural events that Martin Maugeais recorded in his daily early morning attempts at a perfect tone giving the scene a Baroque-like backdrop and bringing together the layers of the contemporary Book of Hours.

Martin Maugeais lives and works in Paris and New York. He studied computer programming, musical composition and visual music at the University of Paris 8 (Saint-Denis) and completed a Masters degree in in 2012. His practice includes music composition (both instrumental and digital), sound installations, and performing with bands Femme Fractale and The General Society.
www.andrewkreps.com