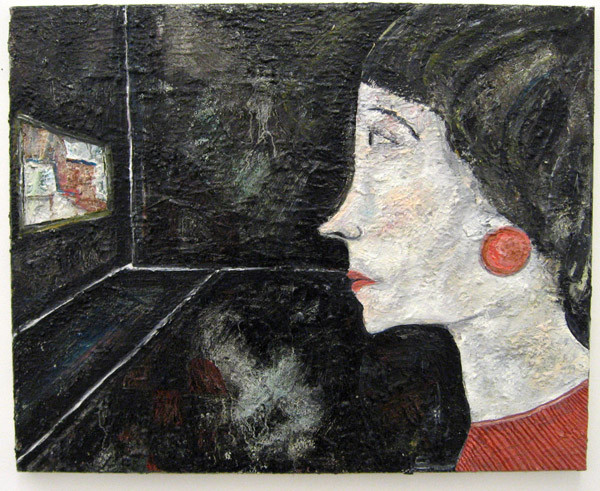 Andrew Kreps Gallery is pleased to present a two-person exhibition featuring the work of Ellen Gronemeyer and Michael Hakimi. Gronemeyer, a German artist living in London, will be showing a series of paintings, alongside an installation by Berlin-based artist Michael Hakimi.

Hakimi's pieces were part of a larger installation previously shown at the Centre Pompidou in Paris, and consist of a variety of works on paper as well as found objects, and a wooden sculptural element. Each work has its own way of contemplating the form and structure of urban space, while also connecting to the other works on view, creating a multilayered composition unto itself.

Skyline (Stencil) (all works 2006) is a sheet of recycled newsprint that has been cut into a stencil of a cityscape. The stencil is pinned to the wall, with a black spray paint halo hovering over the buildings, simultaneously existing as a prop depicting a smog laden city, and as a remnant from the artist having used the stencil to make another object. In Introspecting the Outside World, which is a digital print, Hakimi has illustrated an abstracted silhouette of a ruined building, traversed with tangled lines and floating circles (raised by simply illustrated drop shadows) representing satellite dishes and their wires. As in many of his works, Hakimi uses simple graphic devices to cause the viewer's perception to switch between the atmospheric representational image, the two-dimensional and shallow three-dimensional graphic spaces, and the physical presence of the object (a digital printout on paper).

In a very different dimensional shift, Ellen Gronemeyer's works depict figures inhabiting exhibition spaces, complete with paintings hung on walls and a glass of sparkling wine. The works show invented spaces, but also reflect on the viewer's concurrent experience in the real gallery, outside of the pictorial space. Some of the works are more abstract, which Gronemeyer sees as paintings of paintings that could appear in the imagined galleries shown in her other works. Gronemeyer's small canvases are repeatedly layered with paint; first colorful layers, followed by darker layers, giving them an ambiguous, somber tone with hints of a colorful glow from beneath.