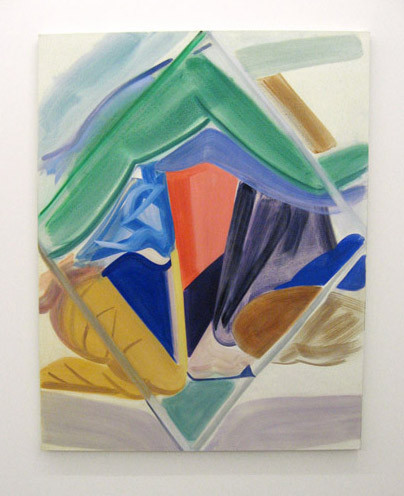 Andrew Kreps Gallery is pleased to present a group show featuring the work of six young artists working and living in New York City. The show is broken into two parts, the photography of Sam Moyer, sculptural installations by Shane Aslan Selzer, and Amy Yao, and painting by Patricia Treib and Kerstin Brätsch will be installed in the front gallery, while a photographic installation by David Benjamin Sherry will be in a second.

Trained as a sculptor, Sam Moyer's photographs feature an event. An inexplicable explosion of white steam or gas obscures the apparatus from which it flows: a generator, smoke machine and heavy-duty construction light. In contrast to the work of photographer Gregory Crewdson, it is a low-fi happening in the middle of a forest, without an audience, obscuring the subjectivity of the viewer. Also using quotidian materials such as linoleum, magnets and cutlery, Shane Aslan Selzer's sculptures obscure and re-contextualize their media so that completely new objects emerge, but still feel recognizable - up-ending the unsettling experience of the intangible with the comfort of recognition.

The minimal installations that characterize Amy Yao's work belie their own inherent and pressing political questions. A narrow strip of glass pins a torn piece of the New York Times to the gallery wall interrogating the disposability of news, and the juxtaposition of war and death with consumerist images. Patricia Treib's work begins with classical painting. Identifying a small piece of the work, Treib begins a systematic, yet organic abstraction. The large-scale paintings that emerge hover between abstraction and figuration.

Kerstin Brätsch's installations are comprised of large oil paintings on paper that are monumental in size and shelving units, that act as a three-dimensional extension of the paintings. These units feature 'zines that are comprised of images that press the abilities of this technology, having been Xeroxed so many times, that they become completely abstractedÖand even magical. The work of David Benjamin Sherry shares this quality but combines it with a theatricality - an image of a dramatically lit bunch of grapes with semen dripping from the bottom is turned upside-down, obscuring its inherent sexual overtones. Recalling the work of Kenneth Anger, this sexuality is intermixed with themes of the occult.
www.andrewkreps.com