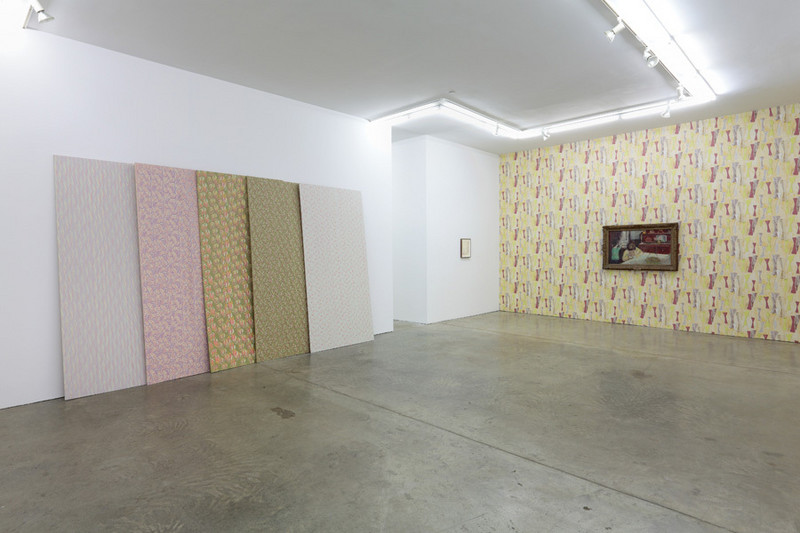 The Andrew Kreps Gallery is pleased to present Interiors, a four-person show including works by Pierre Bonnard, Marc Camille Chaimowicz, William Copley and Édouard Vuillard. The show highlights the rich optical and visual layers and patterning consistent in each of the artists’ work, depicting interior spaces full of feeling, psychological depth and a sense of remembrance – a domestic hedonism, or meditations on the nature of time, perception and memory.

This layering connects each of the artists to a different moment in history; Impressionism, Surrealism, and Post-Pop – but reading them together opens up a thread which connects to the work of Gustav Flaubert – the circumscription of a character’s inner life by a description of their domestic environs. For example, in Madame Bovary the author depicts rooms in which the everyday objects accumulate into accidental still lifes, acting as elements of a psychological portrait. Flaubert utilizes repetition and symbolism to create a complex portrait of his characters, and the four artists in the exhibition use this repetition visually to the same effect - Bonnard and Vuillard collapsing decorative and subjective, Chaimowicz conflating a glam rock and French classical/romantic aesthetic and finally Copley creating surrealist sexual tableaus.

Pierre Bonnard and Édouard Vuillard born in 1868 and 1867 respectively, were known for their inclusion and work within Les Nabis, a group of young artists committed to creating work of symbolic and spiritual nature that also included Maurice Denis. In 1938 there was a major exhibition of both Bonnard and Vuillard’s work at the Art Institute of Chicago. The Museum of Modern Art in New York City organized a posthumous retrospective of Bonnard's work in 1948 and two major exhibitions of Bonnard's work took place in 1998: in February at the Tate Gallery in London, and in June at the Museum of Modern Art in New York City.

William N. Copley was born in 1919 and passed away in 1996. His work is in private and public collections worldwide. CPLY has been the subject of numerous single artist shows, recently at Paul Kasmin Gallery and a traveling retrospective at the Kunsthalle Bern, Centre Georges Pompidou, and the Stedelijk Van Abbesmuseum, and has taken part in important group exhibitions including in documenta 5 and documenta 7.

The Andrew Kreps Gallery would like to thank the Brooklyn Art Museum, Jill Newhouse Gallery and Luc Bellier for their generous loan of works for the exhibition.
www.andrewkreps.com