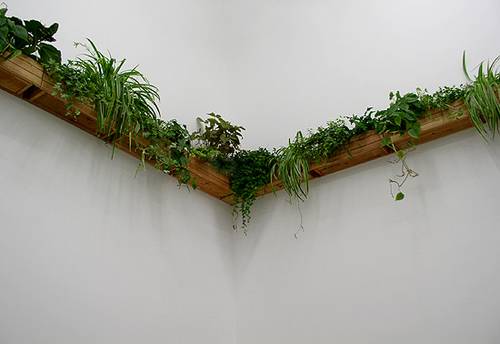 it is, "what is it?". is a group show that integrates works by all of the gallery's fifteen represented artists, organized around Peter Coffin's Untitled (Della Robia), a line of window box planters that goes around the circumference of the gallery, hung at eye level. The other artists' works are hung throughout the space, allowing the line of planters to act as a framing device, much like a window box in a window, or a plant that functions as a border in an illustration.

Works such as Jonah Freeman's image of buildings collaged into an imagined dystopic megastructure and Klaus Weber's model for a psychoactive mirrored hotel function within this effected space. In the center of the gallery, Cary Leibowitz's Oprah For President mugs create an absurd pop-cultural giveaway; visitors are encouraged to take a mug with them. Juan Céspedes, who resides in Chile, has also contemplated a pop culture icon by scratching the Hollywood sign into photos he took of a hill in Santiago.

While Coffin's installation surrounds the gallery, Ricci Albenda's suite of six "diptych." paintings delineate "cyclidromes" (words whose letters move through the alphabet in a circle) and employ Albenda's alphabetic colorization system. The Artist has created six small paintings (Red, Orange, Yellow, Green, Blue, Purple) on panel, each with the word "diptych." painted on it in the artist's own font, infusing the space with the vibration of his signature spectral wordplay.