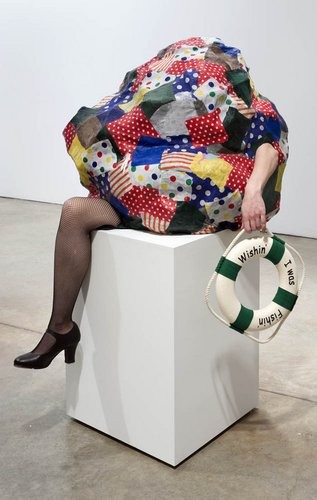 Andrew Kreps Gallery is pleased to present “ ”, Jamie Isenstein’s second solo exhibition at the gallery. The show is comprised of three new works, each questioning the traditional divisions between sculpture, performance, and video. Together the individual works create an installation that skewers classic conventions of the gallery: the "sign-in book", the "abstract sculpture", and the "installation shot".
Isenstein is known for blurring the lines between performance and sculpture, often through her use of her own body as a ready-made object. In referencing and appropriating current strains of contemporary abstract sculpture that combine organic forms and found objects, Dancing Pop-up Fishing Sculpture, 2010,acts like a snowball that has picked up what it has rolled over: human body parts, a hobo/clown costume, bird guano, a snake in a can gag. The sculpture is “holding” a life preserver, which reads alternately “Wishing I was Fishing” and “Gone Fishing” and is thus in a perpetual state of limbo- waiting to fish, or waiting for parts of itself to return from fishing. This gives life to a normally static object as it layers and weaves formal and conceptual concerns of sculpture, performance, abstraction, and representation.
In the same space, a pedestal displays a stack of gallery sign-in books, which are often the first thing that a gallery-goer encounters upon entering. The covers of these books are embossed in gold letters with the words “Book of the Dead”. Since 2005 the artist has been replacing the standard gallery sign-in books with these books so that as gallery visitors sign their name in the books they unwittingly seal their fate. This collection is for sale, and as a result the gallery, the artist, the visitor and collector are implicated in a quasi-Faustian scenario of one purchasing the souls of others. Inspired by the ancient Egyptian funerary texts, these books suggest the gallery is a tomb, a space of both eternity and lifelessness.
In a second gallery a suite of video projectors sit on pedestals, and cast images of sculptural objects (also on pedestals), captured in the standard installation shot-format. Normally sculptures are documented through the use of a still camera, but these installation shots were created with a video camera, the standard way performance is documented. As a result, what seems at first to be a still, lifeless image actually has a real-time presence where action could happen at any minute. The sculptures themselves, the object of the videos, also imply actions that have happened or will happen, further obfuscating the limits of sculpture. In one, a marble base of an ancient Roman figure is featured but the figure is no longer present; all that is left is the marble log girder intended as support for the figure, and a “Will Return” sign to suggest the figure has walked away temporarily. In another video, a harp has been "played" through being turned into a loom and woven like a rug. Ultimately, there are no “real” objects in this installation. The sculptures are represented by their image and the projectors on the pedestals are the only “objects” in the room and in this way, traditional conventions of the gallery and the artwork switch places.
Jamie Isenstein has exhibited in galleries and museums internationally including GalerieGitiNourbakhsch, Berlin and Meyer Riegger Gallery, Karlsruhe and in the Untied States at the Hammer Museum and Michael Benevento Gallery, both in Los Angleles, Guild and Greyshkul, New York, CCA Wattis Institute for Contemporary Arts, San Francisco, and P.S.1 Contemporary Art Center, Long Island City. In 2009 she was included in Marina Abramovic Presents at the Manchester International Festival, a festival of contemporary visual art and performance.
The exhibition will be on view from February 18th – March 20th, 2010. A reception will be held for the artist on February 18th, from 6 - 8 PM at 525 West 22nd Street, New York. For more information contact Erin Somerville at 212.741.8849, or erin@andrewkreps.com.
www.andrewkreps.com