A Touch of Life 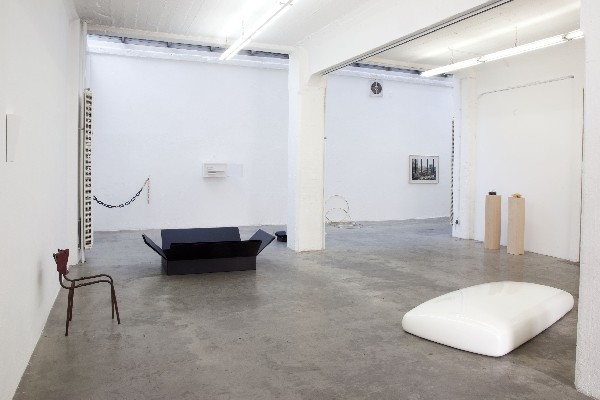 A Touch of Life - Installation View
A TOUCH OF LIFE
Curated by Ludwig Seyfarth
2 March – 21 April, 2012

For occasion of the opening Thomas Rentmeister will perform as DJ.
Artworks are artifacts and not living beings. This alleged implicitness has repeatedly proved to be, at least psychologically, a deficit that Ovid's Pygmalion myth has, by means of fiction, attempted to help.
Pygmalion is supposed to have made Galatea's body so perfectly out of ivory that Venus was moved to bring the statue to life so that she could become Pygmalion's lover.
Giorgio Vasari, the great artist biographer of the Renaissance, rehashed the Pygmalion legend as he praised the sculptor, Donatello who had given marble 'life, feeling, movement'. The illusion of life was repeatedly attempted with great virtuosity, and the wax figures of Madame Tussaud's mimic even the softness of skin.
Too close a proximity to life, however, can take on disturbing traits, and in the 20th century it was mostly banned in art. The alleged vitality of sculpture has been most radically suppressed by the modern dictum of 'truth to materials' and the formal self-refentiality of Minimalism. Abstraction and functionalism manage without the suggestion of life that for consequent Modernists is considered kitsch. Yet, the human figure, suppressed in sculpture and objects, undergoes a bizarre return in horror film zombies and the plastinated corpses of Gunther von Hagens that perhaps just testify that a contemporary Pygmalion can only produce the undead.
Perhaps Pygmalion would not make a female body today but an emotionally charged object, leaving it to come to life. If the associative and narrative potential of sculptures and objects is again coming to the fore, as in Surrealist art objects, it springs predominately from the magic and transformative power of the world of objects and the materials. For the human body appears less as an actor in its sculptural reproduction than a performer who handles things in an unusual way, is harassed by them or conducts himself like a statue.
The exhibition, 'A Touch of Life', pursues this trend, even in the tension between physically tangible object and moving video image. The protagonists are bookends, light bulbs, boxes, knots, nests, tyres, chairs, clouds and many other things that are not always what they seem.