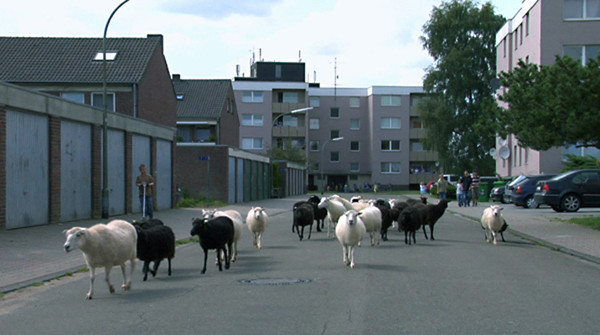 In her video and photo works, Aurelia Mihai (*1968 Bucharest) examines the disappearing boundaries between documentation and fiction in the area of media images. Historical references merge with legends and personal memories, forming suggestive images in which the reflection on the conditions of media perception always resonates.
"The video work of the Romanian artist Aurelia Mihai, in which she reflects on the periodic migration of herds of sheep ("Transhumanţa"), a practice now banned by new EU laws on animal transport. However this is a traditional method of sheep rearing that is a normal ethnic act and part of the cultural identity of many European peoples. Aurelia Mihai portrays and transfers these old traditions to the modern era.
Equally, she examines the medium of film and the production process itself. Caught between fiction, daydream and (pseudo-)documentary, the viewer is entranced by the ostensible, almost scientific plausibility and the authentic fascination of the camera view as well as by the imagination of this suggestive portrayal." (Stephan Mann, Museum Goch)
In our SATELLIT project room, we will additionally show, along with a selection of further works by the artist, the work "Von Herzen (From the Heart)":
"A pretty, young woman in a well-kept Mediterranean garden: With concise words, she gives an account of the all but unbelievable events of her young life, from cancer as a child to her heart transplant at the age of 19. (...)
In Aurelia Mihai's video film, which in just five minutes creates a suspense curve that surpasses many feature films, the most various levels of representation overlap. By aesthetically shaping the authentic and real, the limits of representational conventions (from embarrassment to candour) are touched. The narrator, actress and subject of the story are all same - equally authentic and seemingly composed - person. Word and image, on the other hand, diverge. The rationality of her manner of speaking, the soberness of the text and the use of medical terms such as "immune suppressors" or "high urgency list" strongly contrast her colourful costume and the idyllic location. Yet the picture is deceptive: It is not a fairy tale that is being told here but a chain of tragic misfortunes: Cancer and chemotherapy during childhood are followed in her teenage years by heart disorders, diabetes, asthma, a stroke, and finally the life-saving heart transplant. As opposed to the drama of the narrated events, the account itself is pointedly calm and soft. The camera doesn't move either, it is fixed to one angle." (Doris Krystof)
www.galerie-beckers.de