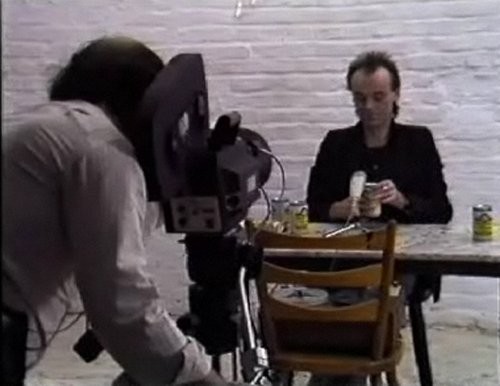 20 years ago Anita Beckers founded a publishing house in Darmstadt, in which she carried editions by renowned artists such as Guillaume Bijl, Wim Delvoye, Thomas Huber, Jürgen Klauke and Urs Lüthi. Later, this edition gallery resulted in an art gallery which is based in Frankfurt since 1998.
We are celebrating this special anniversary with an exhibition by Jürgen Klauke, one of the most important performance, photo and media artists in Germany. As a pioneer of body art he has not only written history but also a discourse on identity which provided a visual-mental basis since the seventies. The films produced during that time have lost none of their actuality. On the contrary, they continuously stand for the political state of affairs of our society and as as an artistic role model for subsequent generations.
Galerie Anita Beckers is pleased to continue its 2009 opening-saison project "Performance-Frame” by showing now early performance films by Jürgen Klauke together with his photographic works from the series " Sonntagsneurosen " (1990-1992).
.
Already in the 1970s, Klauke has used photography as a tool to question himself and the world. In unyielding ways, his own body is mostly used as a central medium of expression for his theatrically staged photographs. In " Sonntagsneurosen " this critical discussion appears as symptom of the condition of contemporary society. The paranoid structure of our contemporary world is presented In a melancholy aesthetic. The actors of this choreography seem frozen in a mask and do not refer to themselves, they have left the sphere of all subjective mood.


Jürgen Klauke is one of the few artists who are able, to make the human condition his theme without falling into an expressive gestural activism. His work is characterized by a political and social investigation, which finds its expression in the grotesque inadequacy of existence.

The artistic works of Jürgen Klauke is experiencing great appreciation with the exhibition "Aesthetic paranoia" at the ZKM | Museum of Contemporary Art Karlsruhe (from May 13th to October 3rd) which will culminate in an exhibition at the Museum der Moderne in Salzburg (from October 23rd - 6. March 11th). At the exhibition "Der Westen leuchtet" at the Kunstmuseum Bonn (July 10th to October 24th, 2010), Jürgen Klauke is represented with his own space.