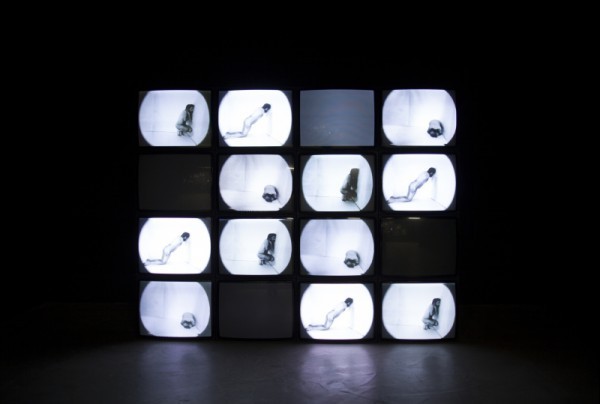 Through the advances of Fine and Performing Arts in the 1960s, a new art form was created: performance. The sources of the performance were mostly painting, sculpture, music and dance. Since 1964, Peter Weibel (*1944 Odessa) has pioneered an influential and exceptional pathway, namely 1. to transform language and media into fields of action 2. to emphasize the participation of the audience.
Instead of underlying the monarchist tradition of the artist's presence, he democratically focused on the audience. He recognized the political as the decisive field of action and thus developed an own sense of political performance, which anticipated the activism of the 21st century.
The exhibition »Political Performance« shows major works of the 1960s and 1970s as well as selected recent works by the artist Peter Weibel. From the 1960s onwards, artists have increasingly left the safe space of institutions and expressed themselves - criticizing them at the same time – through ephemeral events such as performances, happenings and actions. Usually, the relics of such actions are exhibited in display cases in a skillful manner in order to win a certain sculptural character. Photographic documents are oversize enlarged and printed on canvas to bring back a picturesque character. For Peter Weibel however, the action as a process is the artwork and the process is not converted back into an object.
Therefore, the artifacts refer to their documentary character, unless it is media art originally.
In many cases, performance art of the 20th century devoted itself solely to self representation of the artist and his own (artistic) identity. The focus lay in the artist as a performer. On the contrary, Peter Weibel brought forth the participation and interaction of the audience. In the spirit of a democratic promise he turned not only to an audience in the gallery or theater space, which had already entered art institution, but to the audience on the street as the legendary »Tapp- und Tastkino« (1968, Munich) or at the action from the Aktion Aus der Mappe der Hundigkeit (1969, Vienna) together with Valie Export, to the audience in the auditorium of the university, as »Kunst und Revolution« (1968, Vienna) with the Viennese Action Group or to the television audience. Peter Weibel thus recognized the role of mass media in the construction of our reality and opened it as a field of action.
His work remained political: In view of the current debate about globalization, financial crisis and capitalism, many of his works from the 1960s to the 1980s appear almost prophetic, like the work from 1984 titled »Sculpture in Public Space«, in which a space shuttle crashes into a skyscraper. Fire appears repeatedly as a motif, suggesting not only what was already then perceived as an urgent problem, but also in the context of activist, revolutionary and terrorist actions. With the convergence of political and artistic action Peter Weibel anticipated the artistic activism of the 21st century. This is testified by complex blocks of themes on the constitutional state, the welfare state, terrorism and revolution.
www.galerie-beckers.de