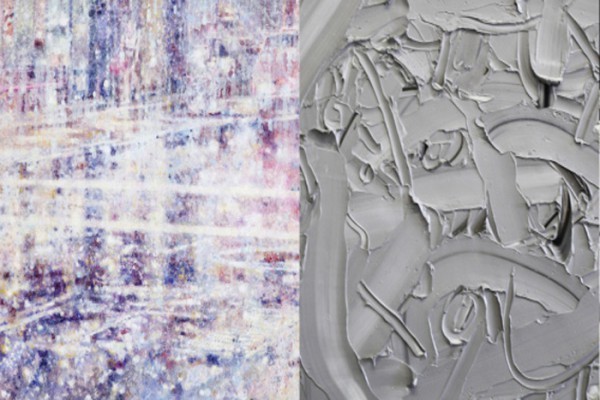 The exhibition "Hidden" features two women painters whose paintings capture a delicate balance between the visible and the concealed. Yet, it is the latter that is more salient because these paintings deal with moving images at different levels.
On one hand, the painting process turns the complex structure directly into a visible result; on the other, it concerns the picturesque implementation of often brief, lightning-like motion moments not easily discerned by a single glance.
In the work of Israeli-born Los Angeles-resident Liat Yossifor, both levels come together. She puts it in this way: “My gray paintings are the result of continuous action, where gestures become done and undone in a moment of time. I do this by working on a painting in one session in order to accelerate the improvisational aspect of painting, until one thick layer of oil gets fixed. The representational black lines are covered with gray. This approach is repeated several times during the development of a painting. The endless possibilities of the lines drawn and edited by knife work destabilize any fixed idea, image, or symbol. This destabilization also lays in the inner relationship between body and abstraction. Painting as performance is an attempt to overcome the fixity of representation”.
Liat Yossifor’s approach undermines not only the traditional distinction between representation and abstraction, but also the contrast between surface and depth.
Everything happens in the surface of the painting, as it charges in a complex manner and becomes the stage of multifaceted operations.
This also applies to the works of Bremen-resident Sibylle Springer. While Liat Yossifor’s physical movements during the act of painting superimpose the represented and bring it almost to disappearance, Sibylle Springer observes the fleeting passing or appearing of images and situations, and then translates them into complex textures of different layers of lines. These form a veil over the eyes, as if it were heavy rain or fog. It is the intangible roads and traffic that permeates the world of today, as if seen through the sharpened eyes of the Impressionists. As Gregor Jansen once put it, in Sibylle Springer’s works, "all hell breaks loose." At the same time, a feeling of floating and easiness that the artist herself compares to the ascension of an airplane: "You still have the feeling of an earthly bond in your body, although one has already taken off from the soil”. (Text: Ludwig Seyfarth)
www.galerie-beckers.de