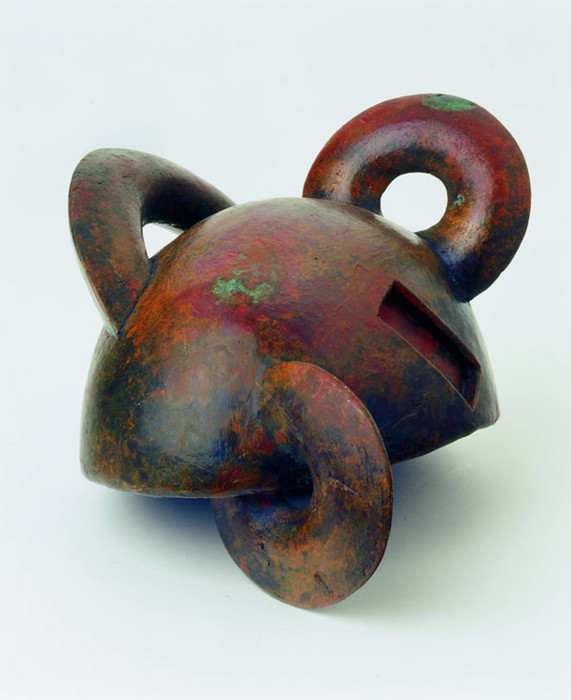 An important new exhibition of the distinguished German sculptor, Lun Tuchnowski, opens in London on 1st November. The exhibition will show a selection of his work of the past five years, the latest of which are a powerful group of sculptures that developed from a wax cast of his own skull. A series of 15 life-size pieces show how Tuchnowski is able to turn this simple shape into myriad different forms that recall the Victorian phrenological maps of the head.

The head or helmet sculptures are shown in the context of two monumental bronze and fibreglass sculptures. These grew from his interest in the ancient Chinese “pi” discs. Normally made from jade these intricately carved circular rings or “pi” discs were funery objects placed on all the body openings as well as the head in burials as symbols of heaven to assist the passage of the spirit there. For Tuchnowski the disc is an exquisite sculptural form that activates the surrounding space endowing it with both dynamism and tension.

Lun Tuchnowski was the master student of the famous Danish sculptor, Robert Jacobsen, and has been strongly affected by him. His sculptures combine two fundamental sculptural ideas of the 20th century. These involve his use of geometrical forms that freely combine with organic shapes and “almost passionately let the seemingly contradictory compete and communicate with each other” (Lothar Romain). His sculptures pivot between logical architectonic structures and forms that are unsystematic or organic. They often differentiate themselves through their fragile balance. The form language is sometimes of a sexual character: single parts reach into space, break through bodies or take on functions of opening, closing or compacting.

Tuchnowski previously exhibited in London in a studio exhibition in the early eighties as a British Council scholar. It was during this time that he met the British sculptors Eduardo Paolozzi and Anthony Caro.
www.annelyjudafineart.co.uk