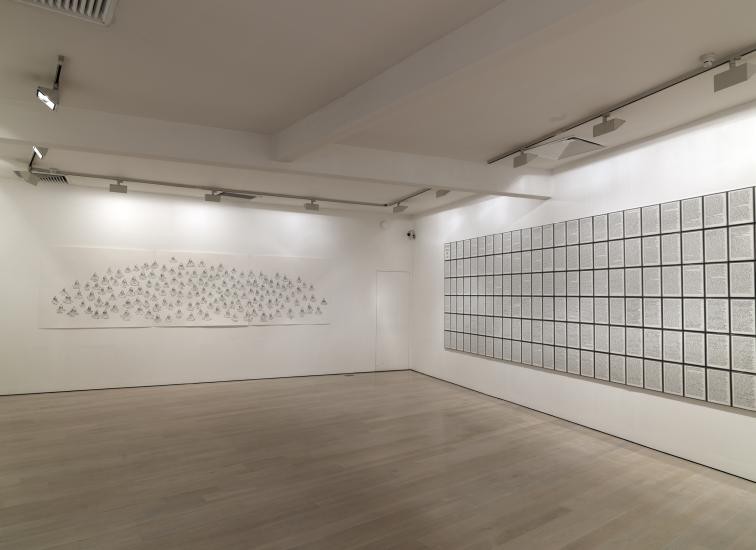 Much of Treister’s recent work maps ways that human intelligence and military intelligence currently interact and work on each other. She explores how in a world increasingly determined by pervasive technologies and the demands of the military and security arms of government and state, new relations between the observer and the observed have been established and new subjectivities formed.

In The Drone that Filmed the Opening of its own Exhibition (2013) Treister brings technologies which relate to recent military and civil drone operations into the art gallery. At the opening of the exhibition a drone will fly into the space filming the event and a monitor will display footage of the exhibition, shot in advance by the commercially available Parrot AR.Drone 2.0. In Camouflage (2013) Treister has sourced documents related to GIG and PRISM projects developed by the US Department of Defense and US National Security Agency. Both programmes of mass surveillance – PRISM famously revealed by Edward Snowden – are for use in times of war and peace. In these works Treister has expanded the original graphic forms and languages across the surface of the reprinted documents.

In The Name Of Art (2012–13) collects titles of exhibitions in the visual arts from 1900–2012. Comprising 180 parts over a span of 6.5 meters we are presented with words – in a Gothic typeface – that contain theses, artworks and cultures. We are invited to seek meaning in occurrences and clumpings of names and words and from this to intuit narrative and deeper structures.
www.annelyjudafineart.co.uk