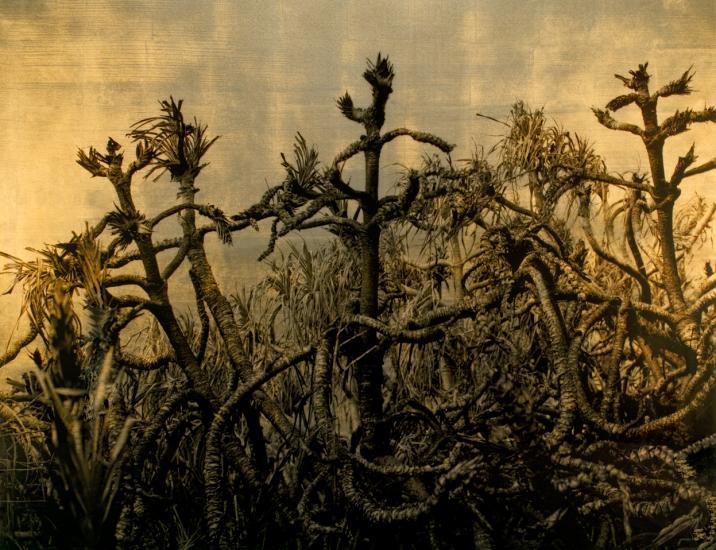 Taku Aramasa was born in Tokyo in 1936, and lived in north-eastern China as a child. After Japan’s defeat in the Second World War, and the collapse of Manchukuo, he remained in China as a refugee for a further two years. Once back in Japan, he started a career as graphic designer, but turned to photography in the late 1960s.

In 1980 he met his parents, from whom he had been separated, and started work on a photographic contribution to the effort of reuniting Japanese war orphans and their biological parents. This work branched into the photography of people of Japanese descent in Hawaii and South America.

In 2000, having completed what was effectively a grand tour of foreign lands, Aramasa turned his attention to Japan. He recounts how he searched for sites unsullied not only by humans but even by birds. Over the years the HORIZON project has evolved into three separate strands: ‘The Border’, ‘Vegetation’ and ‘Visible Transfiguration’. The current exhibition features works from the first and last of these series.

Works in ‘The Border’ series consist of multiple images taken with the position and optical axis of the camera being shifted sideways between each shot. This is different from the way in which panoramic views are taken from a single position, and produces a more enveloping effect with enhanced spacial and tem- poral depth. Works in the ‘Visible Transfiguration’ series are more performative in conception. Aramasa manipulates close-up images of plant forms by blurring light with dark, and shadow with reflection.

Most interesting is the way in which Aramasa has been using OROgraphy, a special method of printing he has recently developed, to alter the appearance of his works and give them added depth. What Aramasa does is to scan a negative, to create a digital image, which he prints onto clear film with an inkjet printer. Having done this, he applies gold leaf of the sort used by traditional Japanese craftsmen to the back of the film. The gold backing adds depth to the image, intensifies the effects of shading, and causes the foreground and background to merge into one another.
www.annelyjudafineart.co.uk