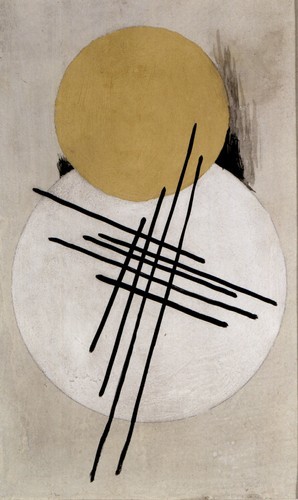 Annely Juda Fine Art has long been renowned for holding major exhibitions of Non-Objective Avant-Garde Art. This exhibition is the latest in the series and shows exceptional and rarely seen examples of paintings, drawings and sculpture from the major artists of the Russian Avant Garde in the early 20th century including seminal works by Kasimir Malevich, Naum Gabo, Liubov Popova, Alexander Rodchenko and Vladimir Tatlin.

The exhibition is in part made in homage to Camilla Gray, the great critic, author, curator and champion of Russian Art. Her major book 'The Great Experiment - Russian Art' was published in 1962, one of the first comprehensive publications on the subject. The exhibition also serves as a tribute to the late Annely Juda, founder of the gallery, who was widely recognised as a key figure in bringing these artists to the British public's attention. The gallery's first Non-Objective World exhibition was held in 1970.

Highlights of the exhibition include a major Suprematist
painting by Malevich 'Magnetic Cosmic Construction' 1916/17, an important constructivist cardboard sculpture maquette by Gabo 'Head in a Corner Niche No 3' from 1917, a 1920 Line painting by Rodchenko and two early Popova paintings from c. 1916 - 1918.

These works alongside drawings, sculptures and paintings by Mikail Larionov, Lazar El Lissitzky, Ivan Kliun, Gustav Klucis and others indicate the extraordinary revolution that was occurring in art at the time. It helps us to see the importance that Russian Art of this period had in the birth of Abstraction and its far-reaching impact on art worldwide. This is a rare opportunity to see such a collection of historically significant works.
www.annelyjudafineart.co.uk