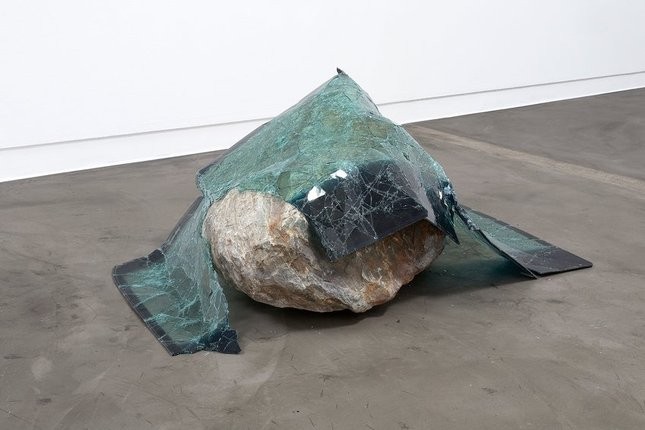 Annet Gelink Gallery proudly presents its fourth exhibition by Anya Gallaccio (Paisley, Scotland, 1963). highway is based on a transatlantic journey; one boulder made the far crossing from the South-West of the United States to Amsterdam. The stone sits in three different manifestations on the gallery floor. Gallaccio alienated it from its original environment – the ancient deserts of California – and transformed it into an artwork.
Three years ago Gallaccio moved from London to San Diego to teach as a professor of visual arts at the University of California. The journey of the stone to Europe therefore, also represents Gallaccio’s personal journey. The stone, which was selected by Gallaccio during a road trip that began at the ocean and travelled through California, Nevada, Arizona and Utah, bears an incomprehensible history of the earth that goes back much farther than that of man. Here on the gallery floor the awe-inspiring relations between nature, man and art become tangible.
The stone sits in the middle of the room, blanketted with a broken car windscreen found buried in the desert. In front is a concrete block containing a crater, cast from the surface of the stone. A bronze cast of the stone sits at the back as a reflection of the acual boulder. The materials chosen are characteristic of Anya Gallaccio’s preference for natural materials: the bronze (an alloy of copper and tin), the broken car glass and the concrete (a sand bond) all refer to the origin of the boulder.
The works in highway remind one of the work of land art artists such as Robert Smithson, who found in the earth again the mysticism of nature. Gallaccio’s black and white photos are microscopic close-ups of dirt she collected during the road trip.
The photographs and the sculptures appear to both focus in and expand the landscape, which can be seen simultaneously as both a physical and mental landscape which belong to the domain of imagination. Gallaccio:
"I wanted to make landscapes with an epic sense of scale, or a strangeness, like planets, and remote unexplored worlds from these tiny particles, normally overlooked, literally under our feet."
Anya Gallaccio studied at the Kingston Polytechnic and Goldsmith College, London. Her work was quickly internationally acknowledged when she participated in Damien Hirst's exhibition 'Freeze' in 1988. Anya Gallaccio participated in a large number of solo and group exhibitions such as Camden Arts Centre, London, Sculpture Center, New York, Barbican Gallery, London, Palazzo delle Papesse, Siena, Tate Britain, London, Ikon Gallery, Birmingham and Kunstmuseum Bonn in Germany. In 2003 she was nominated for the Turner Prize of Tate Britain in London. Her work is included in numerous public collections, among which the Tate Gallery, London, the Victoria & Albert Museum, London, the Museum of Contemporary Art, Sydney, the South London Gallery, London, and many international private collections.
www.annetgelink.com