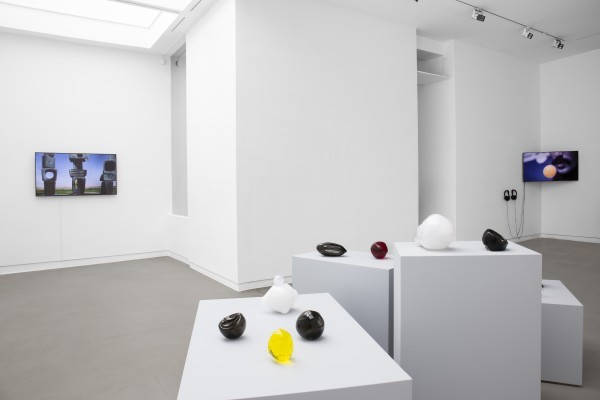 Annet Gelink Gallery is proud to present The Planet O, the first solo exhibition of Maria Barnas with the gallery. Artist, poet and writer Maria Barnas has created an intriguing show that takes as its starting point the potential of language.

At the heart of Barnas’ new body of work is the question of whether words can be trusted as carriers of anything solid. In the context of this exhibition,Barnas takes up the complex relationship between intention and interpretation of language as a source of possibilities, and contemplates this in the form of a wide range of objects and two films. She approaches language from different angles by presenting a variety of works.

Language as shape - For Barnas language plays a crucial role in the development of objects. Does language consist of images? Can you pronounce a shape? In Rhubarb, Rhubarb Barnas developed a series of glass objects, in which she has spoke words into during the blowing of the glass. In the first group she chose words that are used to mimic distant group speech in films, words such as 'rhubarb' and 'watermelon cantaloupe’. Speaking this language of mimicry by herself, resulting in the first word group, and thereby extracting a single voice from the crowd, Barnas expresses an intense solitude of the individual as opposed to a group. The glass speech bubbles, frozen word splashes in space, reveal something of the absurdity of group behaviour and the spoken and unspoken language that goes along with it. In the second word group the words 'Home', 'Heim', and 'Heem', were pronounced, balancing between what is familiar and out of reach.

Language as escapism - The film The International Cosmonaut is a compilation of three video clips that Barnas has found online, which she combines with lyrics about the rituals that cosmonauts perform to prepare for their journey into space, to force their fate. Belief in progress and thirst for knowledge and discovery are confronted with the dark side of the human soul, with all its doubt, uncertainty and existential fear.

Language as power - The Planet O is a dry-ice speech-bubble machine, inspired by the essay/pamphlet Captive Words, Preface to a Situationist Dictionary(1966) by Mustapha Khayati,who called for a new language. 'Every critique of the old world has been made in the language of that world, yet directed against it and therefore automatically in a different language. Every revolutionary theory has had to invent its own terms, to destroy the dominant sense of other terms and establish new meanings in the “world of meanings” corresponding to the new embryonic reality needing to be liberated from the dominant trash heap.'

Language as maker - In the 3-D animation The Great Hunger, 5 voices of shapes and sculptures by Barbara Hepworth, Henry Moore, Alfred Hitchcock, Martin Kippenberger and Michel Houellebecq, discuss their respective heritage, linked as they are, by actual and metaphoric holes in themselves. The humorous animation suggests that it is only language - and the interpretation of art history that the language is taken from - that sets them apart. The question of whether identity and supremacy is based on a choice of words underlies the conversation between the objects.

Barnas builds narratives and alternative histories around history-as-we-know-it and what is presented as factual. An image, like a text, is not a closed container. It rarely depicts or describes what it sets out to. With the works on view, Barnas works against the notion that language should have a specific form, aware of the fact that our grasp of reality is closely linked to the words we (don't) choose to describe. Her work delves into the power structures that language exudes on a day-to-day, art-historical and political level. Moreover, her work sits at the heart of poetry's ability to both heighten and obscure our notion of reality.

MARIA BARNAS (NL, 1973) lives and works in Amsterdam. She studied visual arts at the Rietveld Academie and was resident at the Rijksakademie in Amsterdam and The American Academy in Rome. Barnas is member of the Royal Netherlands Academy of Arts. She recently had a major solo exhibition at De Hallen Haarlem (2016) and participated in several group exhibitions amongst others at the Van Gogh Museum, Amsterdam (2015) and at Stichting Castrum Pellegrini, Amsterdam (2013).