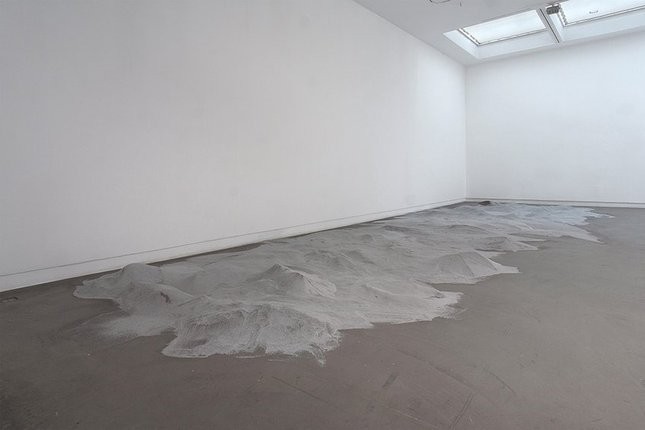 Annet Gelink Gallery proudly presents the first solo exhibition of British artist Roger Hiorns (1975, Birmingham) in the Netherlands. His installations occupy the entire gallery space. Hiorns makes sculptures that investigate material and form in a broad sense. His works can often be recognized as unworldly. They seem to refer to nothing but themselves: to the material of which they consist, to the form they have and to the tension that occurs between them. Hiorns: 'The works are successful if they are self-contained and need nothing else. They exist by their own language.'
On the gallery floor something stretches out that reminds one of a desert landscape. It consists of a powder in various colours of grey, which smoothly flow over each other in an alienating sight. The powder was once a passenger airplane engine, which via an atomizing process was pulverized into fine dust and was scattered on the floor. It evokes associations such as death, or war, but also social-cultural developments like traveling around the world, and of Jackson Pollock’s action paintings. Simultaneously, the work stays exactly what it is: a pulverized engine on the gallery floor.
Hiorns became known for his comprising installation 'Seizure' in 2008. He filled a London apartment, ready for demolition, with a copper sulphate solution, which through chemical process resulted in an interior fully covered with gleaming blue crystal formations. The visitors could do nothing but destroy the crystals on the floor by walking over them...
Hiorns often uses processes in which he himself has no influence on the eventual appearance of the work. In his 'foam pieces' he has large pillars of white foam rising up from ceramic pots, hanging from the ceiling or standing on a wooden stool. The foam will irrevocably find its way downwards and sometimes stains the ceramic surface. Hiorns has the foam and gravity determine the appearance of the work. Also in his BMW car engine, which like the apartment in London was submerged in a copper sulphate bath, the chemical process determines the esthetics of the object.
A characteristic for Hiorns’ working method is the combination of two basic elements, which are simultaneously opposite and supplementing each other: ceramic pots with moving foam, metal with fire, a car engine with growing crystals, steel with perfume, even glass fiber with brain matter. The relation between the movable and the immovable, the living and the dead, yields an undeniable tension in his work. Like a modern-day alchemist Hiorns transforms the objects and materials to give them a new function and meaning.
Roger Hiorns studied at Goldsmiths College in London. Since then he has had solo exhibitions at the Aspen Art Museum in Colorado, The Art Institute of Chicago, the Tate Britain, the Camden Arts Centre in London and the UCLA Hammer Museum in Los Angeles. In 2009 he was nominated for the Turner Prize with his installation ‘Seizure’, commissioned by Artangel.
Hiorns has participated in several group exhibitions amongst others at the Birmingham Museum and Art Gallery, Nottingham Contemporary, the Hallen in Haarlem and the Walker Art Center in Minneapolis. Metropolis M no 6, December 2010/January 2011 features an interview with Roger Hiorns by JJ Charlesworth.
www.annetgelink.com