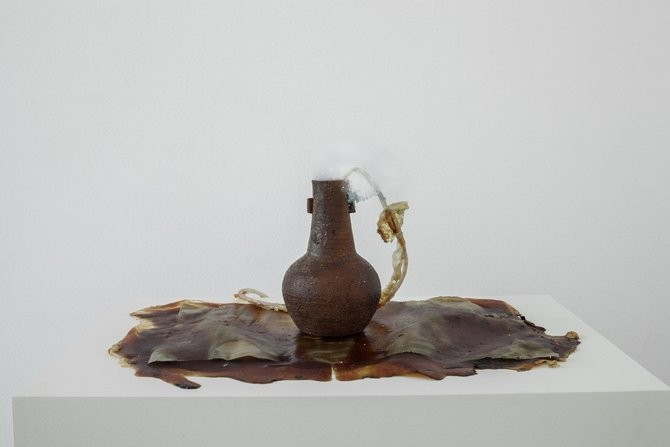 Annet Gelink Gallery proudly presents Roger Hiorns’ second solo exhibition at the gallery. Over the years, Hiorns has developed a singular body of work, introducing new materials and surprising forms. He prefers to work with materials that ‘have their own autonomy and their own aesthetic’, materials such as brain matter, fire, foam and liquid copper sulphate. Exemplary in this respect is his work Seizure (2008) - the London council flat that Hiorns encrusted in blue crystals. With this work, the outcome was uncertain, depending on the dynamics of the chemistry: the material’s inner working. This concept of a thing making itself, an object that self-produces rather than being produced by the agency of the artist, is a central theme throughout the artist’s work.

The works in the current show share this autonomous character, this idea of self-production, while also having their own specific aesthetic. The so-called ‘foam pieces’, which are either suspended from the ceiling or presented on wooden stools, seem to create foam endlessly and from nothing. The ceramic and steel pots, vases and vessels contain a detergent and are fed air from small compressors. Over the course of time, soapy substances move steadily upwards, before collapsing, forming saggy columns on the floor.

Akin to Seizure, the sculptures suggest an independence from their surroundings - both from the gallery space as from its visitors. The foam pieces appear to us as if they exist separate from our world, in another place and time. The works offer no composition, nor dialogue, they offer only themselves. As Tom Morton writes: Foaming efficiently, it is a perfect model of functionless functionality, an object concerned only with perpetuating its own meaningless, mutable forms. With each day, the foam pieces reinvent themselves, presenting infinite shapes in the course of the exhibition.

Roger Hiorns (b. 1975, Birmingham) studied at Goldsmiths College in London. Since then he has had solo exhibitions at the Aspen Art Museum in Colorado, The Art Institute of Chicago, the Tate Britain, the Camden Arts Centre in London and the UCLA Hammer Museum in Los Angeles. In 2009 he was nominated for the Turner Prize with his installation ‘Seizure’, commissioned by Artangel. Recently, Hiorns had a large solo show in the Netherlands at the Hallen, in Haarlem. He participated in several group exhibitions amongst others at the Birmingham Museum and Art Gallery, Nottingham Contemporary and the Walker Art Center in Minneapolis.
www.annetgelink.com