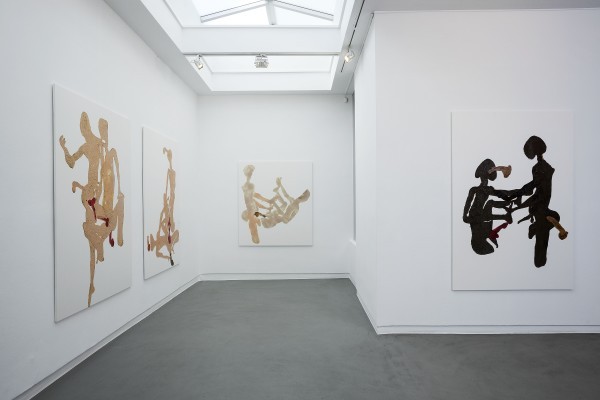 Annet Gelink Gallery proudly presents the third solo exhibition of British artist Roger Hiorns (1975, Birmingham) with the gallery. Hiorns returns to the gallery with a series of remarkable new works that may be familiar to the viewer in subject matter, yet reworked in different materials to create a new body of work with deeper meaning.

The works on display are fresh in material and approach. The large “paintings” are filled with homoeroticism, depicting life-size courting male figures in acrylic and latex paint on polycarbonate panels. This choice of material lends a skin-like texture to the figures through which an intense and provoking atmosphere is created. These works are statements within themselves and can be acknowledged as liberations of the image which visually rebel against the remaining prohibitions on homosexuality within art and society. By liberating the image, Hiorns expects that a liberation of language will follow regarding this taboo.

Hiorns says: “A personal and resistant language is emerging about this complex work, which is directly descriptive of itself: depicts wilful fucking and the sexual relation between two males. It is a pseudo-frieze of panels. The works are paintings, a fascinating but perhaps obsolete language – does paint still effectively describe the slippery elusivity of the world? The sexual materials, the abstraction of the body into a bio-morphic conjoined pairs of pseudo-fibromatosis and sexual ‘Beings’, some with carcinogenic skin, some clean and tested, all racially diverse.”

The panels are accompanied by a resin sculpture, hanging on the wall, which is familiar to us in material and shape, including painted elements. Its subject matter, shaped with lucid reds and shades of brown colour, resonate in the “paintings”.

In the Bakery two of the so-called ‘foam pieces’ are suspended from the ceiling, creating foam endlessly. Over the course of time, soapy substances move steadily upwards, before collapsing, forming saggy columns on the floor. These are accompanied by a video, commissioned by the Hayward Gallery last year, which offers an insight into Hiorns’ research on vCJD, a neurodegenerative disease (a range of conditions which primarily affect the neurons in the human brain that causes with time, all the neurons die out and which leads to, for example, fatal dementia).

Throughout the years, Hiorns has addressed a large number of ethical and social issues. A reappearing theme among these has been his interest in the sociological aspects of the vCJD neurodegenerative disease. Considering how these diseases relate to contemporary society and its future, Hiorns sheds a critical light on the government’s as well as the individual’s role in its origins. The deepening of his investigation has lead to a transformation in his compositions: they have evolved from anthropomorphous figures, made of layers of materials, to more and more realistic bodies.

Roger Hiorns (b. 1975, Birmingham) studied at Goldsmiths College in London. Since then he has had solo exhibitions at the Rudolfinum Gallery, Prague, Centre PasquArt, Biel, Hayward Gallery, London, De Hallen, Haarlem, Aspen Art Museum in Colorado, The Art Institute of Chicago, the Tate Britain, the Camden Arts Centre in London and the UCLA Hammer Museum in Los Angeles amongst others. In 2009 he was nominated for the Turner Prize with his installation ‘Seizure’, commissioned by Artangel. He participated in several group exhibitions amongst others at the Birmingham Museum and Art Gallery, Nottingham Contemporary and the Walker Art Center in Minneapolis. In 2016-2017, he will have a big solo show at the Ikon Gallery in Birmingham.
www.annetgelink.com