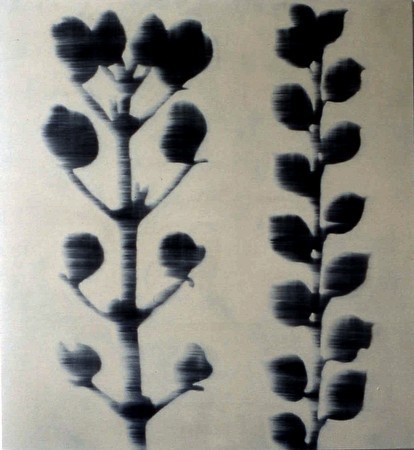 ANDREW MANSFIELD, KARL BLOSSFELDT AND STAN BRAKHAGE - An Encounter
A Garden of Delights
22 May - 30 June 2013

Over ten years ago, Andrew Mansfield made a series of exquisite paintings derived from images in Karl Blossfeldt’s Art Forms in Nature. Blossfeldt’s work, first published in 1928, made a profound impact on the development of the photographic image in the 20 century and the current magnificent exhibition at The Whitechapel Gallery demonstrates the astonishing beauty of these images and their remarkable union of Arts and Crafts ornamentation with a new modernist formalist aesthetic. These works sit as happily with Moholy Nagy as they do with Owen Jones.

In a review of the first publication of Blossfeldt’s images, Walter Benjamin commented that ‘Every calyx, every leaf confronts us with pictorial essentials which range through all stages of creation: metamorphosis in Nature has the final word.’ Mansfield’s paintings take up the challenge implied by this observation, absorbing the image into the paint to the point where the one is the genesis of the other; a blurred precision where the sweep of the brush stroke drags the paint over the plant’s silhouette and surface becomes form. The captured nature idealized in Blossfeldt becomes in Mansfield’s work the blurred evocation of that natural form conjured out of the paint whilst still retaining the photo-mechanical aesthetic of the source. ‘The difference between technology and magic’ (Benjamin). This is the first time this series of paintings has been exhibited.

As a further dimension to our assembly of closely observed flora, for one week only we are screening a classic film by Stanley Brakhage, The Garden of Earthly Delights (1981). As Brakhage said: ‘At the time I made The Garden, I was very annoyed with Hieronymus Bosch’s painting of the same name, which envisions nature as puffy and sweet, while the humans are suffering these torments. After all, nature suffers as well. As a plant winds itself around, in its desperate reach for sunlight, it undergoes its own torments. We are not the only ones in the world.’ Blossfeldt’s plants are specimens under the microscope, laid out for visual dissection (the Surrealists were attracted by the morbid sadism with which Blossfeldt decapitates his flowers). In Brakhage’s collaged film a panic struck hoard of foliage scrambles for life imprisoned in the projector’s beam. The pathological stillness of Blossfeldt is complemented by the agitation of Brakhage. Mansfield’s hand-made paint surface mediates their condition.
www.anthonyreynolds.com