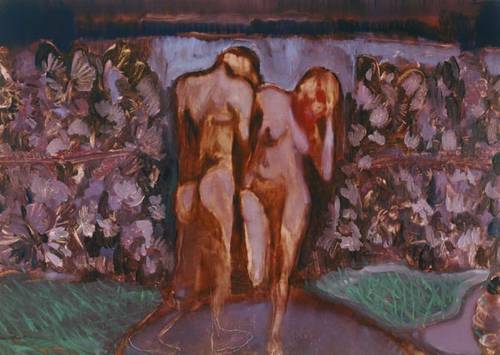 February 11, 2006—In his third solo show at the Anton Kern Gallery, Italian artist Alessandro Pessoli departs from his well-established vocabulary of small-scale watercolor drawings. He breaks with familiarity of the paper in favor of large aluminum panes boldly painted with enamel, oil and spray paint. The exhibition, entitled Fuga Verde (“Green Escape”), consists of twelve such panels.

Fuga Verde refers to the title of a painting that depicts a rather tense scene of a woman and her infant child on a donkey flanked by two warrior figures. Pessoli applies the paint in a fluid way covering the metal surface in thin glossy layers and thus making the colors radiate between hues of cold green and fleshy pink. He achieves an effect of luminosity not dissimilar from that of road signs or Technicolor film. Allusions to Catholicism or current historical-political events seem obvious. However, Pessoli elevates the scenes to a level worthy of Balzac’s Comédie humaine representing human passion and frailty in all its varieties. Pessoli feeds the imagination with unexplained, comical, sinister, melancholy and sometimes even grotesque juxtapositions.

Since the artist’s seminal New York debut at the Drawing Center in 1997, Pessoli’s work has been presented in numerous solo shows in European galleries as well as in the recent exhibition of painted ceramic sculptures at Chisenhale Gallery in London (2005). It has also been included in group shows at the Fondazione Sandretto Re Rebaudengo in Turin, Italy (2002), the Hammer Museum in Los Angeles (2003), and the Philadelphia Museum of Art (2004).

Delete/How to Make a Perfect Ghost a group exhibition curated by Michael Clifton runs concurrently with this exhibition at Anton Kern Gallery. Both shows open on Thursday, March 2 and will run through Saturday, April 1, 2006. The gallery is open Tuesday through Saturday, 10 am - 6 pm. For further information and images, please contact Christoph Gerozissis or Michael Clifton at tel 212.367.9663, fax 212.367.8135 or email: info@antonkerngallery.com.