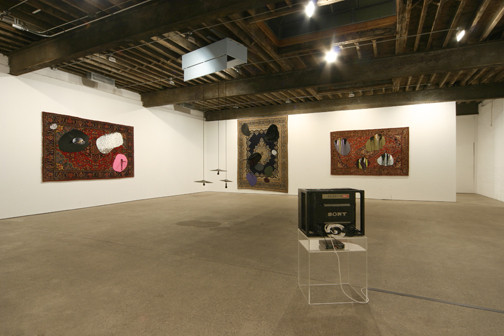 April 4, 2007— Jim Lambie’s forth solo-exhibition at Anton Kern Gallery consists of five modified wall tapestries, an assemblage-like floor sculpture and a video. On a closer look, however, and while submitting to the artist’s premise proposed in the exhibition title The Prismatics, the viewer enters a space of optics and sound filled with white noise, black light and the heavy atmosphere of the marvelous. The gallery space has become the prism through which the exhibited objects are broken up and bounced around like the spectral colors formed by the refraction of light. Persian rugs, punctured,
densely collaged and mounted onto aluminum, suggest a familiar kind of exoticism, and the term The Prismatics seems to expand from the field of optics into that of music, to be precise, implying the name of a garage rock band. Since being introduced to the West in the 17th and 18th centuries, ancient Asian wall and floor coverings have always inspired the Western imagination, instantly turning the once coveted, now ubiquitous rugs into an object for the projection of desire and oblivion. In this conflation of optics, sound and Orientalism, the rugs, the musical sculpture and the video of flickering light in the dark act like magical objects (flying carpets perhaps?). They create n environment that suggests the possibilities of change. This is Jim Lambie’s way of haping knowledge through the use of common objects and the fabrication of particulars.
Lambie’s work has recently been presented in one-person shows at the Hirshhorn useum and Sculpture Garden, Washington, D.C. (2006) and the Dallas Museum of Art, Dallas (2005). His work has also been included in group exhibitions at the Hayward Gallery, London (2006), the Albright Knox Art Gallery, Buffalo (2005), and the 5th Carnegie International at the Carnegie Museum of Art, Pittsburgh (2004), and will be featured in a group show at the Museum of Contemporary Art, Chicago later this year. In 2005, Lambie was nominated for the Turner Prize by the Tate Britain.
The exhibition opens on Thursday, April 19 and will run through Saturday, May 26, 2007. The gallery is open Tuesday through Saturday, 10 am - 6 pm. For further information and images, please contact Bridget Finn, Christoph Gerozissis or Michael Clifton at (t) 212.367.9663, (f) 212.367.8135 or email: info@antonkerngallery.com.
www.antonkerngallery.com