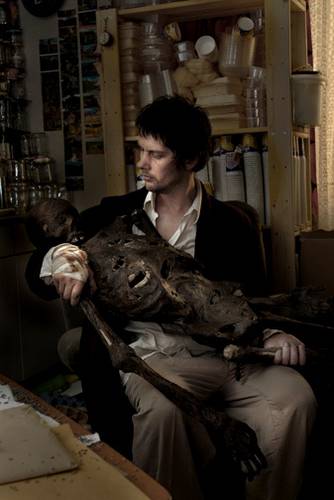 October 7, 2006—“Mit Schisslaveng” (loosely translated, “off the cuff”) is the programmatic title of German artist John Bock’s fourth solo show at the Anton Kern Gallery. The exhibition will consist of a film installation called “Zezziminnegesang” and a group of sculptures installed on the roof of the gallery and accessible via a spiral staircase uncturing through the skylight to the roof. The exhibition will be on view until November 25, 2006.

Seemingly off the cuff, Bock’s work is finely choreographed in the improvisational spirit of Hulsenbeck’s recitals, Kaprow’s happenings or Beuys’ more communicative actions. Making the semiotic open-endedness of everyday materials the core of his collages, assemblages and films, Bock intends his works to be potentially useful and operational, thus engaging the viewer directly in a Gesamtkunstwerk, or “total work of art.” “Zezziminnegesang” for example is not only a film about a down-and-out obsessive-compulsive protagonist who lives with a ghost named “Golden Man” and a mummified skeleton, but is also a sculptural installation which includes an inviting armchair. The slightly off-kilter spiral staircase takes the visitor up to the sculptures on the roof and out of the gallery environment into the unruly realm of Chelsea air space, where principles are altered and escape from the art world is actually possible.

John Bock has presented his work in numerous lectures and actions throughout the U.S. and Europe, most recently in a large musical production at the Berlin State Opera Unter den Linden entitled Medusa im Tam Tam Club, and at the Guggenheim Museum in conjunction with his nomination for The Hugo Boss Prize 2006. Along with solo exhibitions at the FRAC, Marseille (2005), and the ICA London (2004), Bock’s work has recently been included in group shows such as Mapping the Studio at the Stedelijk, Amsterdam (2006), What’s New Pussycat? at the Museum for Modern Art, Frankfurt, Abnormal at Nyehaus, New York, Dionysiac at the Centre Pompidou, Paris, as well as the Reykjavik Arts Festival, the Biennale di Venezia, the Lyon Biennial (all 2005), the Carnegie International (2004), and Documenta 11 (2002). The Moore Space Loft in Miami will present Zero Hero in December 2006.