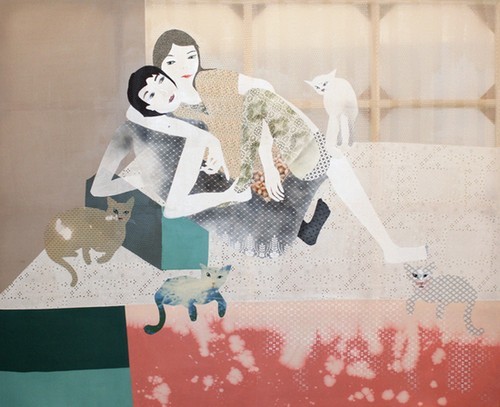 April 8, 2009, New York – For her fifth solo show at Anton Kern Gallery, Los Angeles-based Dutch artist Lara Schnitger presents a group of her characteristic sculptures along with a dozen textile paintings. Sculptures and flat works alike are carefully constructed from dyed, stitched, and collaged fabric, and wood.
An atmosphere of sensual equilibrium and erotic contentment, of intimacy and closeness, emanates from these works. In her free-standing sculptures, Schnitger applies a basic system of stretching fabric over joined sticks of wood. The tensile force of the textile keeps the wooden armature firmly in place, creating large volumetric forms. The conversion of materials creates an organic tension between structure and membrane, endowing the forms with human characteristics.
By contrast, the flat works depict figures, mostly women, alone or with the occasional chicken, duck or cat, and at times even with a nod toward Mannerist painting. Lace and tie-dye patterns cover arms and legs like a tattooed second skin while the flow of liquid pigment envelops the figures in a hazy atmosphere of subtle eroticism where posture, facial expressions, and half-closed eyes intermingle. In certain flat works, the use of sheer fabric becomes an honest devise to reveal craftsmanship and simultaneously expose and obscure the body. Throughout her work, Schnitger combines sensuality with practicality, casting her women in the glow of self-awareness and fulfillment.
Since her last Anton Kern Gallery show in 2005, Lara Schnitger has had solo shows at Magasin 3 in Stockholm, Sweden, The Museum of Modern Art in Arnhem, Holland, and most recently at the Museum Het Domein in Sittard, Holland. She also participated in several group shows including Sonsbeek Sculpture Exhibition, Arnhem (2008), Unmonumental: The Object in the 21st century at the New Museum, New York, Don’t Let the Boys Win, at the Mills College Art Museum, Oakland, Fantastic Politics, at the National Museum of Contemporary Art, Oslo, Norway (all 2007), as well as USA Today at The Saatchi Gallery, London, and The “F” Word, Andy Warhol Museum, Pittsburgh (both 2006).
www.antonkerngallery.com