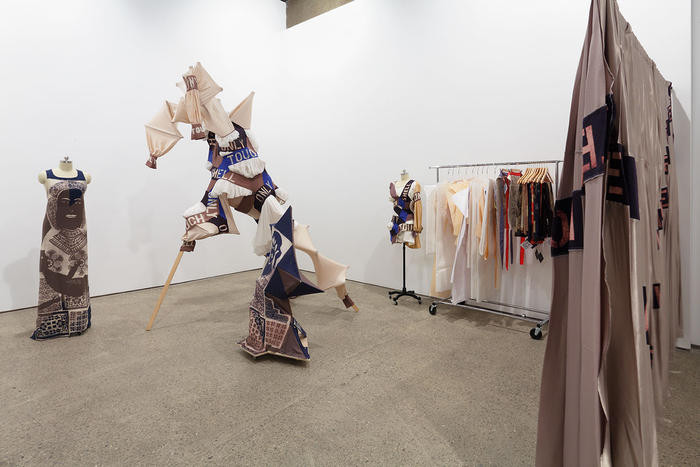 Sister of Arp is Lara Schnitger’s line of couture. After making fabric sculptures for over fifteen years, which have been shown internationally in museum collections such as the Museum of Modern Art, NY, the Museum of Contemporary Art, LA, the Stedelijk Museum, Amsterdam, and Magasin 3 in Stockholm, Schnitger has begun producing a line of wearable garments. “Never Alone” is her first couture collection from her Sister of Arp line and is composed primarily of unique handmade silkscreened dresses, jumpers, and shawls. The collection, "Never Alone", will be presented at Anton Kern Gallery, New York, this February, 2013, with a performance by Flea from the Red Hot Chilly Peppers.

“Never Alone” plays with themes of motherhood, feminism, fashion and sculpture. The collection was inspired by the image of Schnitger’s old friend holding her young children as though they were dynamic accessories, crawling and dangling around her body. This collection presents the “working mom” being glamorous and breast-feeding at the same time.

Patchwork, stencils and lace, create evocative messages. Prints of hands and limbs appear to touch the body of the woman wearing the dress and texts such as, “Smell, Touch Only”, refer to sexual desire where the woman is in charge. Linen and silk are playfully being used as aprons and undergarments, positioning the over and under, the practical and the intimate, and the rich and the poor as equally significant.

The images appear by removing the color from the dyed fabrics, creating a harmonious discharge that reveals shadows of the stenciled forms. Most of the garments have no side seam; their pattern wraps around and is cut on the bias, making the front just as important as the side and the back. These pieces are like walking sculptures that invoke a heightened sense of elegance and empowerment for the women wearing them.

Since 1991 Schnitger has received numerous grants, including one from the Mondriaan Foundation in Amsterdam, The Pollock-Krasner Foundation in New York and Project-subsidy, stiching Fonds voor Beeldende Kunsten en vormgeving, Amsterdam. In 1999 she participated in the Liverpool Biennale and the Shanghai Biennale in 2002.
www.antonkerngallery.com