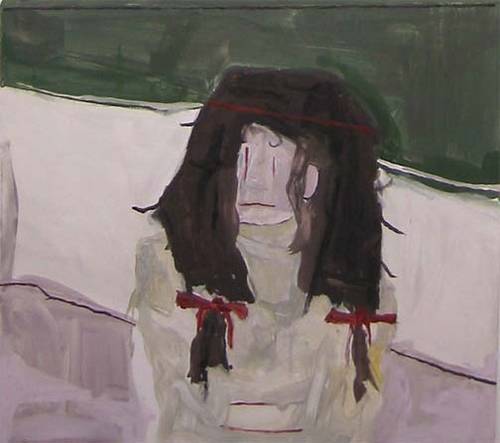 March 22, 2006—In his fifth solo show at the Anton Kern Gallery, London-based photographer Saul Fletcher presents a set of new pictures, as well as a group of paintings and a wall-sculpture. In fact, the exhibition marks the artist’s transformative expansion from photographer to painter and sculptor. Yet, as complete as this change may seem—from sharp-eyed observer with the camera to creator of seemingly abstract paintings—it is in all truth the plausible extension of Fletcher’s fascination and engagement with the process of image-making, in particular the physical manipulation of his studio wall. The paintings allow the viewer to peep through the surface of the photograph into the physical space of Fletcher’s visionary mind and to identify the wall as the projection locale of his imagination.
As Dan Fox observes in his contribution to the accompanying catalog:
Saul Fletcher, author of the eleven documents, understands his own wall as a sea captain understands the oceanic temperament. It stays in one place yet it is a means of travel. [...] Eyes dance imaginative reels across their surface crust, and the walls absorb blows of frustration when events outside their cubic embrace have not been sympathetic to us. They are immovably resolute sentinels, crutches that steady when we wish to stay still. A wall looks flat only to those who are strangers to it.
The catalog entitled Saul Fletcher: Nocturama was produced in collaboration with Galerie Sabine Knust in Munich, Germany. It contains images of all new photographic works as well as essays by Dan Fox, Robert Howatson, and Peter Weiermair
Currently, Saul Fletcher’s work is exhibited in the 4th Berlin Biennial for Contemporary Art (March 25 – May 28, 2006). Aside from numerous gallery solo shows in Europe and New York, Fletcher’s work was included in the Carnegie International 2004 at the Carnegie Museum of Art, Pittsburgh.
The exhibition will open on Thursday, April 6 and will run through Saturday, May 6, 2006. The gallery is open Tuesday through Saturday, 10 am - 6 pm. For further information and images, please contact Christoph Gerozissis or Michael Clifton at (t) 212.367.9663, (f) 212.367.8135 or email: info@antonkerngallery.com.
www.antonkerngallery.com