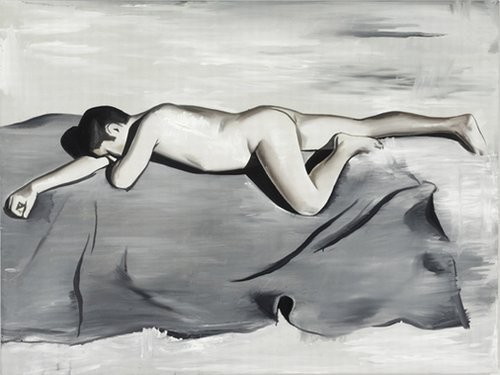 Anton Kern Gallery, Polish artist Wilhelm Sasnal has selected a group of paintings organized around topics of personal contemporary life. This selection includes not only pictures of his friends and family but also views of the sea and sky. Parallel to his expanding practice and recognition as a filmmaker, Sasnal continues to engage the viewer with painted images of stillness, privacy, and solitude.
Images of his wife, his son, friends and a startling gynecologist complement views of the night sky, the vast ocean, painted in broad uninterrupted fields of color generously spread across the canvas. The figures are standing still, looking intently at the scene before them, an industrial landscape here, a large pool of teal-blue water there. Or they recline, under a tree, on the beach, in bed. But these are not moments of leisure, but rather of contemplation and thoughtfulness, of hushed conversations, of silence or dreamlike muteness. As in the painting of a boy calling out to the viewer who – standing at he painterʼs vantage point, namely far out in the ocean - is unable to hear his voice. His voicelessness dominates the painting in the form of a large biomorphic white shape that seems to trigger modernist memories in the viewer.
Sasnal employs a large range of pictorial alternatives extending from methods used in illustrative commercial art to complete abstraction. Every picture is a singular event, which applies not only to his chosen motifs but also to his pictorial mode. These works are private and almost intimate, their strength lying in the slowness of the moment, the halting of the present, their ability to slow down contemporary life to the point of stimulating metaphorical meaning and universal memories of intimate feelings and modern life. Sasnalʼs work has been presented in retrospective exhibitions at K2 in Düsseldorf, Germany (2009), and the Zacheta National Gallery of Art in Warsaw (2007), a show that travelled to CAC in Malaga, Spain (2009), and the Sara Hildén Art Museum, in Tampere, Finland (2010). Further one-person shows include the Neues Museum, Nürnberg, Germany (2009), Fundació la Caixa, Barcelona (2007), Van Abbemuseum in Eindhoven, the Frankfurter Kunstverein in Frankfurt, the Douglas Hyde Gallery at Trinity College in Dublin (all 2006), and the MATRIX Gallery at the Berkeley Art Museum (2005). His work has been included in group shows such as the 55th Carnegie International, the Glasgow International (both 2008), Musée dʼ Art Moderne de la Ville de Paris, MoMA, New York (both 2007), the Stedelijk Museum in Amsterdam, where he won the 2006 Vincent Van Gogh Biennial Award for Contemporary Art, the National Museum of Art in Osaka, the Museu Serralves in Porto, the Sculpture Center in New York (all 2006), the Saatchi Collection, London (2005), and the Biennale de Sao Paulo (2004).
The exhibition opens on Thursday, April 8 and will run through Saturday, May 15, 2010. The gallery is open Tuesday through Saturday, 10 am - 6 pm. For further information and images, please contact Christoph Gerozissis or Nahna Kim at (t) 212.367.9663, (f) 212.367.8135 or email: info@antonkerngallery.com.
www.antonkerngallery.com