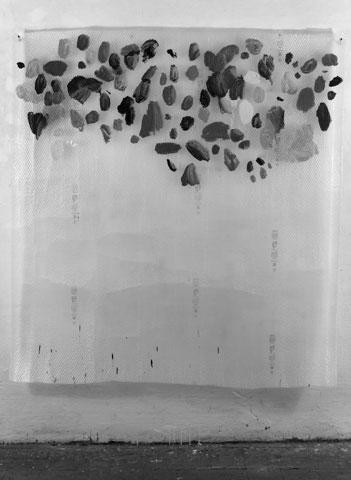 Six Tips for Ageing With Grace is a perfectly evocative way to describe Luca Bertolo’s practice. How is this so? In any other context, such as that of a fashion magazine, the stock statement ‘six tips for ageing with grace’ would reflect little more than a forced and capriciously upbeat optimism, one which barely dissimulates a growing anxiety about gravity and a sense of being pulled leadenly and inexorably toward earth. In the context of Luca Bertolo’s work, however, the statement performs differently, taking on something at once more considered and light. It has a way of sending the imagination if not upward, then outward. Indeed, it is as if they, these tips, far from the cynicism that one would normally expect to accompany such a transposition, were well meant, sincerely believed, and imparted in the best possible faith. And yet maybe they are less tips than reminders to self. They could be said to reflect a desire to develop according to the steady pace of a slow burn rather than an explosive flash in the pan, to gradually, continually and deeply become, as opposed to having suddenly and briefly been. Both cases seem to be borne out not just by what Bertolo does, but also how he does it.
Luca Bertolo is a painter. With the exception of the odd performance and video, Luca Bertolo makes paintings. All sorts of paintings. They testify to a broad, variegated and often contradictory range of styles, interests, and approaches, from pointillist figuration to a kind of urban realism to brushy or geometric abstraction. If there is anything stylistically consistent about Bertolo’s work, it is the seemingly inexhaustible sense of experimentation that motivates it. This is because he is restless painter. A painter who seeks and finds. And continues seeking. Not content to alight upon a given motif, genre, style, or singular preoccupation, Bertolo seems determined to defend his right to continually differ from himself. Nor is he necessarily interested in readymade abstraction. Where others of his generation might take the so-called end-gamism of painting as an opportunity to rest on borrowed laurels (and in doing so, instantly and gracelessly grow old), coolly and aloofly indulging in readymade citational antics, Bertolo continues on his quest to see what painting is capable of, what he is capable of. He seems both comfortable and uncomfortable in an aesthetic territory that is, as we all already know, at once the width of a tightrope and limitless.
- Chris Sharp

Luca Bertolo (Milan, 1968) After a degree in Computer Science and a period spent in London, Bertolo attended the Accademia di Belle Arti di Brera, Milan, IT and from 1998 to 2004 he lived in Berlin, DE and in 2005 in Vienna, AT. His paintings, drawings and collages are on view at the NOMAS Foundation, Rome, IT (until May 18) as the final part of ‘A Painting Cycle’. Bertolo is professor of painting at the Accademia di Belle Arti di Firenze, Florence, IT. He lives and works in the Appenine Mountains, Northern Tuscany, IT.
www.thisisarcade.art