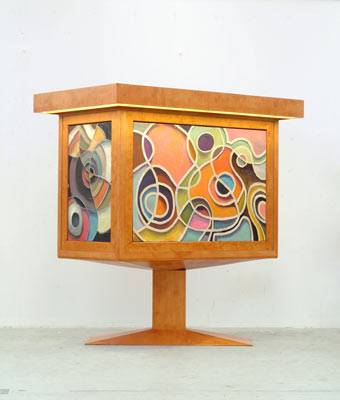 
The paintings of Anton Henning easily provoke a reproach from the critical beholder. Overladen with visual allusions and art historical quotes, his densely coloured, impassioned panoramas often verge on the borders of good taste. While developing a very broad formal repertoire, the artist generously and boldly appropriates the ocabulary of modernism. Seemingly arbitrary he mixes stylistic characteristics of Courbet, Mondrian, or Warhol. Geometrical and gestural abstractions hover within landscapes, interiors, still-lives or nudes, while garish colours collide with desaturated hues, creating an infernal canon of our collective visual memory.

Yet, Anton Henning does not simply cater to the art historically educated viewer. He misleads him by combining motives of modernist masterpieces with ordinary images from the 21st century. Palm tree-lined beaches and Picasso, pin-ups and Picabia appear within the same pictorial space – and yet, are not a collage. Both worlds are merged artistically by means of a vigorous and confident handwriting. By doing so, the artist consciously flirts with the decorative and the superficial.

The convergence of style and subject matter is as much part of Henning’s artistic language as the playful interweaving of autobiographical sujets and historical references. Whilst he plays with familiar visual codes, he places himself amongst historical figures, thus claiming equal prominence for himself. The walls in his painted Interieurs, for example, display his own paintings right next to Warhol’s flower pictures. Furthermore, their warm and glowing colours evoke Matisses’ paintings of his studio. Are these tobe read as an atmospherical homage to the modernist masters? Or rather as an ironical commentary? Probably both – in any case Anton Henning’s paintings take the viewer on a journey to the modernist past, which is undermined by its existence as a quotation.

While the flat picture plane is an integral part of Anton Henning’s oeuvre, he does not merely confine himself to this medium. Recurrently, he transposes his sujets into three dimensional space, introducing yet another level of references. In his installations he questions deconstructivist approaches to the White Cube, alluding to traditions of institutional critique during the 70ies. Further he reinterprets the Salon – the epitome of the bourgeois’ cultural sphere of the late 19th century. The walls of his three-dimensional Interieurs, which he often refines with self-designed furniture, are composed in geometrical fields of colour and adorned with his own canvases. His paintings, again and again quoting his own pictorial vocabulary, seem like obtrusive pop-ups, forbidding any concentration on the monochrome geometrical patterns on the walls. His installations thus seem like a picture-puzzle of his two dimensional compositions.

At Arndt & Partner, Berlin, Anton Henning will for the first time exhibit sculptures, encountering yet another level in his oeurvre. Through his mesmerizing sensuality and his respectful, but winking commentary on the achievements of his artistic predecessors Anton Henning purposefully incurs criticism. Even though his new works are presented on pedestals and thus are reminiscent of sculptural conventions, not all of them can be read as sculptures in the literal sense. Rather, some of them are canvases fastened to cubical objects, encouraging the viewer to walk around them. Besides, he will present three-dimensional translations of his ornamental, abstract shapes, that have for years untamingly been swirling through his paintings. What we have known from Anton Henning’s (wall-) paintings, is now blocking our way. ‘Sculpture is what you bumb into, when you back up to see a painting’, Barnett Newman once complained about the large scale works of his colleagues. His statement does not apply to the oeuvre of Anton Henning: when we are looking at his paintings, we are at the same time perceiving his sculptures and the other way round.
www.arndtartagency.com