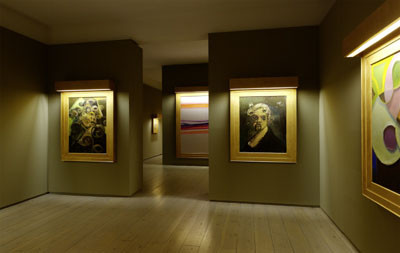 Arndt & Partner Berlin is delighted to present the third solo show of works by Anton Henning entitled 20 Jahre Dilettantismus ...
Anton Henning has been painting for over twenty years.

His method could be compared to that of a card player: collecting, shuffling and dealing. The painter collects motifs and styles, shuffles them into endlessly new combinations and gleefully deals them out again, that is to say, presents them differently every time. The motifs can be as classic as a bunch of flowers or a portrait, and as bizarre as a gas station at sunset or a beach scene without a horizon line. The styles explicitly refer to Courbet and Matisse, Warhol and Polke. When shuffling, the painter regularly smuggles in a few of his older canvasses, thereby subjecting his work to a certain historicization – he not only reflects on aspects of the history of painting, but on his own history, as well.

The way in which he unifies this heterogeneity and supplements or mixes it with abstract motifs marks him as a maverick among contemporary painters. And similarly to a number of others of his generation, he extends the field of battle well beyond the picture frame: He also styles the walls, the carpet and the furniture. Henning’s entire world is determined by painting. He designs an elegantly simple set of living-room furnishings and then hangs his paintings – upon which similar salon scenes are depicted – above the couch. The canvasses are placed on painted patterned walls, which are often given the same mauve hues as the carpets. His abstract compositions are frequently rendered in marshmallow colors, and constitute an even more distanced critique of abstractionist heroics (e.g. abstraction as the embodiment of Western freedom during the Cold War) than Neo-Geo did in the 1980s. And if that wasn’t enough, female nudes frequently manage to sneak into his wonderfully detailed exhibition spaces: With Henning it’s only a small step from the creative freedom of abstraction to unbridled naturist eroticism.
The paradigm of Henning’s art is the bourgeois salon, less on the scale of a four-room apartment than of a stage set. He undertakes to reconstruct – within art institutions – the private context of the gentleman, so as not to abandon his works to the colorless, lifeless ambiance of the white cube. He creates within the museum the environment in which his works – once sold – will appear in private homes, which sounds deadly serious, but in fact is unfailingly done with great wit and irony.

Often an artist’s studio is the only place you’ll find his or her complete world. With Henning, the situation is reversed. He is constantly creating new salons in galleries or museums – ever-changing spatial-emotional-intellectual entities – that provide an insight into his cosmos, though not necessarily enabling us to get a grip on it. He applies 20th-century stylistic elements and a contemporary perspective to resurrect the artist’s salon of the 19th century. And for each new exhibition, he jumbles everything up again like a card player, and in doing so asks: What was the promise of Modernism?

The exhibition will be accompanied by a catalogue.