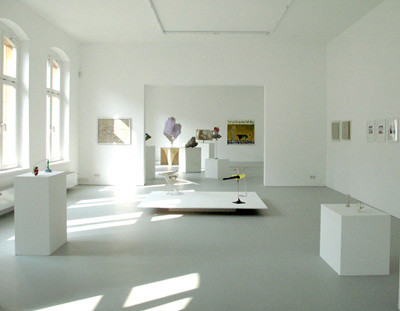 Arndt & Partner Berlin is pleased to present a selection of works by Franz West from various private collections. In this retrospective exhibition, works are being shown from all periods of the artist's career, including fragile papier-mâché sculptures, collages on newsprint in artist’s frames, and Franz West furniture.

The fundamental idea of the Austrian artist Franz West – to both communicate as well as interact with and through art – is expressed in various ways in the exhibited works, and indeed in a certain way by their aura. They give a sense of the patina, which also might result from having been for a while in private collections, where they might well have been objects of direct engagement.

His engagement with sculpture began with the so-called Passtücke, or "adaptives": freestanding, amorphous shapes made of plaster, papier-mâché, or wire that could be attached to the body as supports or prostheses, thus underlining the interactive character of his art. West calls the furniture he has been creating since 1987 “adaptives for the human body at rest.” He thus takes up the practice of early Vienna Actionism, opening up new layers of meaning by humorously linking the body and the artistic object. Is this art or an object for daily use? Hardly an important art event can do without chairs made by Franz West. For example, he equipped Documenta 9 in 1992 with 72 carpet-covered sofas, and at Documenta 10 participants of the event series "100 Days – 100 Guests" were seated on his colourful canvas-covered chairs.

Additionally, the exhibition at Arndt & Partner will include collages from the 1970s, where West combined textual and visual material from magazines and newspapers with painting, completing the content with his own titles. Once again, the adaptive gesture comes through – alien text material is combined with his own, or adapted to it. The retrospective character of the works chosen is complemented by early, bold gouaches and melancholy pencil and roller-pen drawings from 1972.

Franz West was born in Vienna in 1947, and studied at Vienna's Akademie der Bildenden Künste. His first shows took place in the 1980s in Vienna, Frankfurt, and New York. The artist has participated several times in Documenta, the Venice Biennale, and Skulptur Projekte in Münster.

The exhibition is presented in our gallery magazine CHECKPOINT #1 in a lengthy article with further illustrations. The magazine is available at the gallery; upon request, we would be pleased to send it to you.
www.arndtartagency.com