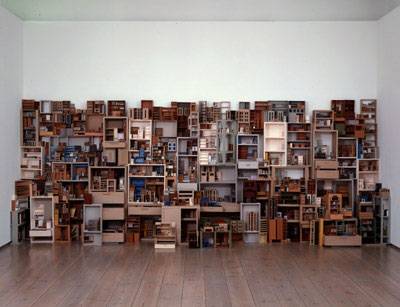 The exhibition "Habitat" comprises disparate works by five international artists each working in a different media. Despite their heterogeneity, all the works investigate the structures and phenomena of globalised, urban existence. They examine spaces of private, public, or subcultural life, focusing on the way human beings inscribe themselves into their environment, and on how their actions are reciprocally conditioned by certain systems and milieus.

The light-projections of the Scottish artist Charles Sandison immerse the viewer into a synthetic, ephemeral world made up of words and numbers slowly drifting over walls, ceilings and floors. The paths of the projected signs that upon first sight seem caleidoscopic or accidental are generated by computer programs specifically constructed by the artist for each of his works. Formative influences of Sandison's work are the Poésie Concrète and the Language Art of the 60s. In some of his works the movements of the digital signs seem like abstract choreographies of light, simulating systems of organic life. In others the ciphers or letters more narratively coagulate into figurativ silhouettes and symbols.

The Polish artist Katarzyna Józefowicz meticulously and obsessively contructs countless components from inexpensive materials, such as cardboard, paper and newspaper clippings, which she then assembles into fragile but visually enormously dense installations. For her work entitled "Habitat" Józefowicz elaborately stacked approximately 1000 modules into and on top of one another, resembeling miniature furniture for offices and living rooms. Thus she achieves complex architectural forms that
interweave the personal with the public, the individual with the standardised. Habitat portrays the confined conditions of the featureless blocks of flats in rapidly expanding cities, relating former to the actual living situation of the artist herself.

The Dutch artist Erik van Lieshout also reflects his immediate social environment and real life experiences. In his often satirical videos, installations and drawings he primarily investigates ethnic and cultural frictions and clichés. At Arndt & Partner he presents three large scale works on meters long paper panels. Depicting scenes of street life or partys, he renders his motifs with vigorous charcoal lines and sparse intense accents of paint. His protagonists are often reminiscent of caricatures. Erik van Lieshout draws with a skilful crudity that recalls the works of
Martin Kippenberger.

The works of the Polish painter Marcin Maciejowski employ figuration as well. However, in contrast to van Lieshouts figures, Maciejowski deliberately rids his predominantly male protagonists of their personas by avoiding any individuality in painting their faces and bodys, as well as by schematizing their gestures. Thus the stylized anonymous figures in Maciejowski's flat, comic-style oil paintings read like templates of a consumer society, that constantly reproduces stereotypical norms of gender and behaviour. Maciejowski's approach is ironic, while his gaze is filtered through media. This is particularly revealed in paintings, combining image and text similar to subtitles in films.

In his interventions, videos, installations und photo series the Mexican artist Jonathan Hernández thematizes other aspects of consumption. In his work "Real Estate" he presents hundreds of photographs of abandoned buildings and vacant, overgrown real estates - neatly glued next to one another - behind glass. He thus creates an archive of desertion of urban landscapes. Hernández` oeuvre also recurrently deals with the tourism industry and illuminates its relations with terrorism or with the art market.

Katarzyna Józefowicz was born in 1959 in Lublin, Poland. She lives and works in Gdansk, Poland. Besides having exhibited in numerous group shows, e.g. at the Migros Museum für Gegenwartskunst, Zurich, the National Museum, Warsaw, the Kunstwerke, Berlin, the Sculpture Center, New York and the Biennale in Sydney (2002), she presented successful solo exhibitions in galleries, such as the Foksal Gallery Foundation,
Warsaw and the Galeria Kolo, Gdansk, Poland.

Marcin Maciejowski was born in 1974 in Grójec, Poland. He lives and works in Krakau, Poland. He presented solo exhibitions, for example at the Marc Foxx Gallery, Los Angeles, Meyer Kainer, Vienna, the Polish Institute, Berlin, or the gallery Raster, Warsaw. He also participated in a number of exhibitions at institutions, such as the Center of Contemporary Art, Warsaw, the Kunstbüro, Vienna, and the Center of Culture at Minoriten, Graz.

Charles Sandison was born in 1969 in Scottland and lives and works in Tampere, Finland. Selected institutions at which he presented solo exhibitions are: the Centre Georges Pompidou, Carjac, the Wäinö Aaltonen Museum, Turku, Finland, Galerie Frank, Paris, and the Lisson Gallery, London. Further he was included in important group exhibitions, for example at the Moderna Museet, Stockholm, the Museum Morsbroich, Leverkusen, Germany, the 49th Venice Biennale, and the ICA, London.

Erik van Lieshout was born in 1968 in Deurene, Netherlands. He lives and works in Rotterdam, Netherlands. Besides numerous group exhibitions, for example at the Stedelijk Museum, Amsterdam, the National Museum of Modern Art, Tokyo, the 50th Venice Biennale and the Kunstverein Museum in Progress, Vienna, he presented solo exhibitions in galleries and museums, such as the Gronigner Museum, Holland, Fiebach und Minninger, Cologne, Stella Lohaus Gallery, Antwerp, and Galerie Fons Welters, Amsterdam.