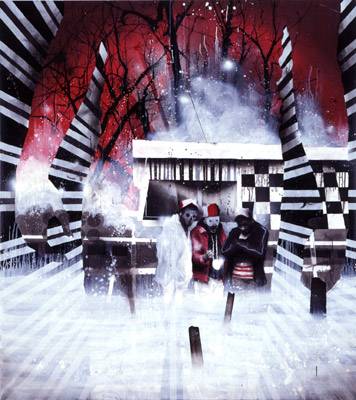 We are pleased to announce the second solo exhibition of Henning Kles at Arndt & Partner Berlin.
Last year the painter convinced with pulsating colour fields, mysterious figures and a toxic colour range at Arndt & Partner Zürich. By layering wafer-thin glazes of oil paint and depicting imaginary light sources, illuminating the painting magically from within, he created paintings of a fascinating spatiality and an unreal atmosphere.

Henning Kles, born 1970, has researched art history and media theory during his studies, which is clearly recognizable in his works. In 2005 he finished his course of Fine Art at Hochschule für Bildende Kunst in Hamburg, where, besides his studies with Werner Büttner and Olav Christopher Jenssen, he also studied with the guest professors Daniel Richter and Tal R.

As motifs for his paintings the artist uses photographs from newspapers and magazines as well as stills from feature films and recurring pictorial inventions from art history.
Kles’ narrations are not linear, but rather associative and analytical, so that the works function like short stories, in which the plot is compressed into single images. However, the fragments have to be pieced together and thus for every spectator an individual film appears, ranging between dream and nightmare. „The Encylopedia of Urban Myths- from Astral Journeys to Zombies could be one of the main keys for the reception of my work” according to Henning Kles (Hamburg, 2005).

In his new body of works presented at Arndt & Partner Berlin at the end of April, the colours black, white and red dominate the paintings. One may assume the painter deprived himself of one of his strongest trumps - his virtuous colours. But painting for him is a laboratory, allowing new experiments to continually challenge the balancing act between aesthetical seduction on the one hand and reflection upon the medium on the other hand.

Through the focus on only three colours his new works achieve a certain strictness without having to neglect the mood and ambiguity, that is so typical for them. Henning Kles continues to draw his motifs from a fund of archetypes, such as pirates, cowboys or sheriffs, representing specific moral ideas of good and evil. By using a collage technique he combines these sources with current press imagery, filmic and literary quotations, as well as depictions of historical events. The paintings now seem less like fairy tales: they are more urban and seem to distance themselves more from reality. The figures resemble characters from the Film Noir of the 1950ies.

This March, Henning Kles will be represented in the group exhibition „Gesichter einer Sammlung“ at the Kunsthalle Mannheim, Germany. Later this year the Kunstverein Bielefeld, Germany, presents a solo exhibition by the artist, running from 18 August until 15 October 2006 (catalogue), and towards the end of the year his work is on show at the Kunsthaus Zürich.