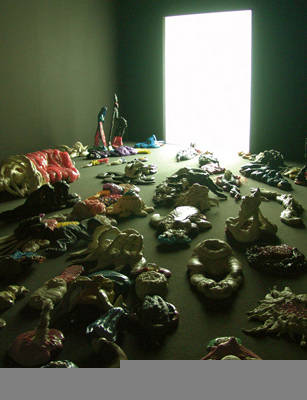 Please join us for the opening on Saturday, 3 February from 6 to 8 pm.

The following interview was held by Martina Baleva on occasion of this exhibition and puplished in the Arndt & Partner gallery magazine CHECKPOINT.

MB: You often base your work on timeless stories. The installation ‘New Noah’s Ark’ (1991/1992) that will be shown at Arndt & Partner is based on the Old Testament story of Noah, which you linked up to personal themes, and your own experiences and stories. It is a product of a very volatile period, when Bulgaria was in the throes of the first economic shockwaves after the collapse of the old regime. In view of this specific context, I ask myself to what extent an awareness of the particularities of that situation is important to understanding your work.

NS: In principle, an awareness of these circumstances is important. But it is not indispensable. Although much of my work is based on specifically Bulgarian experiences, I always try to give it a universal perspective too. Of course, when I did that installation I was thinking of my own family (my wife and children contributed to ‘The Strange Noise’ CD) and our life in the breeze block we lived in. At that time, everybody was expecting salvation from somewhere. My Noah doesn’t get any help. He has to help these strange ‘Creatures’, that were stranded in his bathroom one day, but is not allowed to take anything or anyone from his world, which is doomed to extinction, into the ark with him. It’s all about our feeling of dependency. That is one of the most important themes of this installation.

MB: The components of the piece that attract most attention are ‘The Stone’, ‘The Book’ and ‘The Creatures’, because they are not just labelled as a stone, book and (96) creatures but as their respective prototypes. The book and the creatures can be read as direct references to the Bible, or humanity so to speak. But the stone into which the word ‘you’ has been chiselled, has a double meaning. One the one hand, it is reminiscent of the stone tablets Moses received from God, and on the other the ‘you’ is direct address to the viewer. What do you ask of the viewer in ‘Noah’s Ark’?

NS: To put him or herself in the place of Noah. I ask people to imagine how difficult it must have been for Noah to be told whom he could and couldn’t save.
MB: You said earlier that at ‘that time’ everyone was expecting help from somewhere. Does this mean that the creatures are somewhere safe today?

NS: According to the narrative in the ‘The Book’ presented in the installation, Noah saves the creatures by putting them in the ark and transporting them into a third world (from whence he also received the orders to save them). Maybe the creatures are happy now. I haven’t thought about it to be honest.

MB: In comparison with much of your other work, which is often provocative and has an ironic sort of bite, this installation seems melancholy, even sad. The Noah having breakfast in the painting doesn’t seem very enthused with the prospect of saving the creatures, nor does the window in front of him open out onto a particularly welcoming landscape.

NS: That is right. But the piece does also have a dark kind of humour about it, which is revealed particularly in ‘The Book’. These passages from ‘The Book’ are also on display in the first light room, where ‘The Painting’, ‘The Stone’ and the 12 drawing of ‘New Noah’s Ark’ are too.

MB: Text forms a very integral part of your work. Have the conceptual tendencies in fine art since the 70s influenced you in any way?

NS: To be honest, none of these trends or movements had any influence on me at all. When I began working with texts, we had no access to information on any of these developments in art in Bulgaria at all. I have been telling stories through paintings since the 70s and at a particular point in time, text just seemed a logical continuation of the direction I was moving in – with a particular story in mind.

MB: A few months ago, a retrospective on the conceptual use of text in Bulgarian art over the past twenty years opened in Sofia. The exhibition title ‘Important Announcement’ referred to your work for the 1999 Venice Biennial commenting on Bulgaria’s 30 year long non-participation in this Biennial, and most of the pieces in the show were yours. In your work, do you differentiate between a narrative and a conceptual approach, or are there other criteria too?

NS: I wouldn’t draw those kinds of distinctions. Of course there are pieces which are more conceptually oriented, such as my most recent ones, but there are other pieces – especially those from the mid 90s, which are composed of the most various elements and executed in a range of different techniques, like ‘New Noah's Ark’, for example.

MB: So would you define yourself as a conceptual artist who tells stories?

NS: I am a storyteller, and my stories unfold in space.
By Martina Baleva

Nedko Solakov, born in 1957 in Cherven Briag, Bulgaria, is internationally the most well known artist of the younger generation of Bulgarians. He lives and works in Sofia, Bulgaria. Having participated in numerous exhibitions, e.g. at the Venice Biennials (1993, 1999, 2001, 2003), he has gained attention worldwide. He has held solo shows in museums such as P.S.1, New York (2001); Museo Nacional Centro de Arte Reina Sofia, Madrid (2003) and
Kunsthaus Zürich (2005). His first retrospective was shown at Casino Luxembourg – Forum d’art Contemporain, Luxembourg, at the Rooseum Center for Contemporary Art, Malmö (both in 2004), and the O.K Centrum für Gegenwartskunst, Linz, Austria (2005). In 2007 he will again participate at the Venice Biennial.