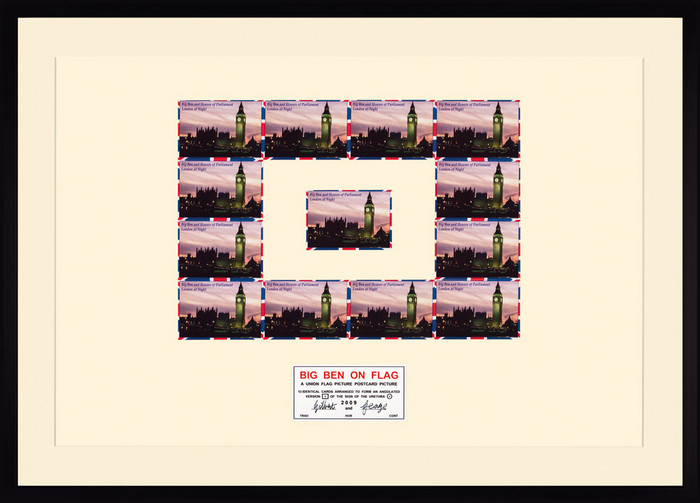 POSTCARD PIECES / FLYER PICTURES und LONDON TELEPHONE BOX PICTURES
Nearly four decades after their first exhibition of Postcard Art, and twenty years after their last group of pictures made of selected postcards, Gilbert & George returned to this medium to make an extensive group of 564 new pieces. Typical postcard topics such as the Union Flag, landscapes, the Royal Family and tourist destinations, are complimented by telephone box cards and flyers, which are mainly focusing on prostitution. 52 pictures from this single largest group of art works by Gilbert & George will be exhibited at ARNDT Berlin from 29 April 2011.

A two-volume set catalogue published by Prestel illustrates all 1.004 new "The Urethra Postcard Pictures" and early Postcard Pictures (1972–1989), most of which have not yet been catalogued or exhibited before.

Michael Bracewell describes the significance of this body of work in his contribution for the catalogue as follows: “In their sheer visual intensity, the extremism of their language and above all the forceful unity of their composition, THE URETHRA POSTCARD PICTURES both extend the POSTCARD ART of Gilbert & George as a specific form, and comprise one of the most powerful, mesmeric and intensely conceived and created groups of artworks that the artists have ever made.”
www.arndtartagency.com