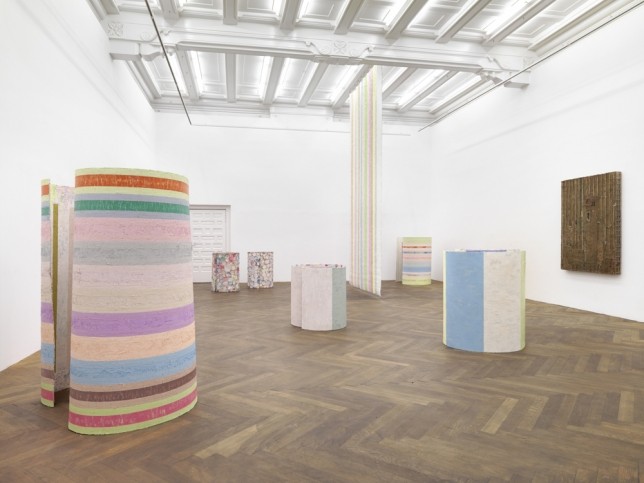 Contemporary art practice and writing in and from Southeast Asia tends overwhelmingly to mobilize ideas around tradition in relation to pre-modern histories, post-colonial narratives, identity politics, and nation building. The group exhibition Traitor and Tradition brings together four leading artists living and working in different cities in Thailand and Cambodia whose practices and works exist outside of these expected regional frameworks: Mit Jai Inn (Chiang Mai), Pinaree Sanpitak (Bangkok), Sopheap Pich (Phnom Penh), and Svay Sareth (Siem Reap).
The terms traitor and tradition share etymological roots in Latin, referring to a handing over, a passing on, a delivering or surrendering of something. While traitor is rooted in disloyalty, a rupture, a subversive changing of sides, tradition’s loyalty is toward unchanging, a continuity of a past. Around the time of her 1971 essay Changing, curator and critic Lucy Lippard poetically imagined that artists from the Americas to Europe to Asia might have intuitively sensed a synergy between the seemingly antithetical terms traitor and tradition as it applied to their practices. In that period of massive social and political unrest, her title referred to both “the world” and a shift in how artists were responding to it. A disloyalty to established formal traditions became important, provoking sensual and contextual approaches to material as a conscious attitude that did not ‘perform’ an explicit politics.
Today, as waves of political protest across Thailand and Cambodia unsettle the everyday, the loyalties expressed in Traitor and Tradition remain with the artists’ practices themselves. While each artist embraces numerous media and varying aspects of participation, their primary dedication is to a materiality that refuses representation, definition, or stability. Rather, their processes invoke metamorphosis. Individually and in relation to one another, the resulting works infer a tactile cadence of coming into being, giving a sense that the artists’ individual traditions confirm something chosen, rather than imposed.

Mit Jai Inn’s paintings come into being at his outdoor Chiang Mai studio, where he gives turns to the vibrating spectrum of sun and moonlight, with nocturnal interludes of white fluorescent. He considers his laborious painting process a form of meditation, a rhythm for an optimistic non-time – both separate and complimentary to his public role as a political agitator.

Embedded in Jai Inn’s multi-layered, colorful compositions and ongoing serial forms are nods to ‘Eastern’ and “Western’ paintings’ histories, memories of a sacred-secular intimacy of color-form-function, and site-specific dedications to the nations, spaces, hosts or publics of his works. While the artist is less interested in general religious associations between his paintings and suspended prayer flags or rolled iconographic ceremonial painting, he is inspired by and willfully inherits associations with their direct purpose: to create a merit-field for the makers and their publics; to be an invitation, an opening

For Traitor and Tradition, the hanging Untitled (Wall Work) and standing Untitled (Scrolls) are encrusted with blotches and varying measures and blurs of longitude and latitude. The artist speaks of this series as site-specific memorial, “Both consciously and unconsciously, they are a recognition of the atmosphere and liveliness of the Berlin I knew...retrospective and blurred memories...a vibration from a distance.”

Jai Inn spent the years between 1986 -1992 based in Vienna, assisting Franz West and studying at Academy of Arts. His ongoing series Wall Works began in Berlin in 1986 as playful alternatives to conventional painting styles, economies and exhibitionary frameworks of their time and place. Unstretched and unframed, the one or two-sided color fields on canvas were dealt by a range of public figures such as taxi drivers. Jai Inn’s two-sided, free-standing Scrolls series began in 2003 after returning to Thailand.

In Thai language, verbs play as a way to socialize. When one invites a friend to share time together, it is usually to ‘talk-play’, ‘walk-play’, even ‘rest-play’. Jai Inn’s works are intended to invite conversations as they sit, rest, lay, hang, curl, and roll-play. The relatively subdued color and heavy weight of his double-canvased, two-faced, multi-layered painting-sculptures for Traitor and Tradition suggests a preoccupied play, indeed a nostalgic role-playing of their maker’s past.

Working primarily with rattan and bamboo, Sopheap Pich’s sculptural practice has evolved over one decade to embrace both the representational and the abstract: multivalent voluminous forms, coiled dogs, unfurling Buddhas, tiered candles, sinuous flowers, stacked bombshells, the curvilinear Khmer alphabet, modular cities and more recently, the grid. Pich’s grids refuse ‘technological miracles’ ; as structure, surface, and pattern, they directly reflect both the material of the form and the form of the material.

Much of his early critical acclaim foregrounded the exotic nature of his uses of material and dramatized Khmer Rouge legacies of war and survival. While the artist agrees in his works’ ability to resonate with their environment and the stories they tell of past journeys, however he increasingly draws inspiration from their processes of coming into being.

Sopheap Pich’s insistence on more intuitive, material and formal references intensified within and after his Wall Relief series dOCUMENTA(13), of which curator Carolyn Christov-Bakargiev noted, “When one sees these objects, one sees things that are emerging from a craft and a relationship with the will and the needs of the materials, and at the same time metaphysical, philosophical, and ontologically established objects.” For Pich, the grid as object continues to inspire the infinite potential of relationship with other materials including burlap, beeswax, earth pigments indigenous to Cambodia, and more recently, the factory-made – the latter perhaps symptomatic of the relentless industrialization process around his Mekong River studio just outside central Phnom Penh.

Pich’s reliefs become private topographies, with titles both hinting and eschewing logical appropriation. Works featured in Traitor and Tradition – Old Domain, Desert Planes I and Desert Planes II (all 2014) are striped and stitched in burlap. Originally packaging for uncooked rice, the burlap is sourced from Phnom Penh’s markets; each sack selected for its used (and reused) character, its markings and stitches, colour and texture. Pich preserves these traces that infer past lives. Together between the strict and revealed grid lines, his works become “noise, many lives together, like insects, or stars.”

Pinaree Sanpitak’s central meditation is around the body as a vessel of experience and perception. Most recently she considers how the body is epitomized or minimized, how the body is a site of transit.
Her sensorial inquiries are pronounced through a tactile rootedness and fluidity between materials and practices, including collage, drawing and painting, and sculptures involving textiles, glass, ceramics, and metals. Her works give a sense that she listens to and converses with matter – the physical substances of her material choices – resulting in an intimacy that provokes inspection and interactivity.
Sanpitak’s studio is open to rhythms of home and neighborhood. It borders the tropical garden and kitchen-dining areas in her family home, which is situated on a quiet soi in central Bangkok near a bustling wet market. Her solitary studio often extends to offsite collaborations with a range of practices including chefs, musicians, storytellers, writers, architects, craftspeople, and audiences. In both collaborative and participatory projects, Sanpitak is known for relinquishing control and playing audience to her own work.

Traitor and Tradition brings together three interconnected series in which metallic, ovoid forms share formal, sensual and symbolic relation to the artist’s repertoire of the vessel, the breast, the seed, the cloud, the stupa. The chilly cast aluminum multiple Connected (2014) is joined by a lifeline of thin stainless steel chords. Modular to an intimate range, the forms remain interdependent. While the paintings are overlaid with a color named ‘stainless steel’, there are hints of warmth in the patchwork of Grey Breast Vessel (2014) and the sliver of dried flowers in Seeds IV (2014). Sanpitak’s impenetrable sheaths give a lightness of rest-mass – her sensual reaction to unstable surroundings is tuned to the ethereal transit-body.

Svay Sareth’s works in sculpture, installation and durational performance are made using materials and processes intentionally associated with war – metals, uniforms, camouflage and actions requiring great endurance. While his critical and cathartic practice is rooted in an autobiography of war and resistance, he refuses both historical particularity and voyeurism on violence. Rather, his works traverse both present and historical moments, drawing on processes of survival and adventure, and ideas of power and futility.

Traitor and Tradition is host to Svay’s latest soft-sculpture series Ruins (2014 - ). It was initially inspired by the ruinous state of the artist’s studio and garden during and after the making of his recent large-scale commission Toy (Churning of the Sea of Milk) for the Singapore Biennale 2013, in which multiple oversized Hindu deity figures – Asuras (The Bad) and Devas (The Good) – pose in tug-of-war. Strewn around his working spaces were molds and models of body parts, simultaneously recalling war-torn scenes of the past and the uncountable Khmer stone ruins floating around in the present – the most significant pieces of which are “rescued” and classified by dealers, auction houses and archeologists.

Ruins is a series of fragments classified in titles by character and body part. Mythical and religious identities made anonymous, dismembered – reduced to mortal human elements that created them. Their hulking presence, camouflage skin and cartoonish ornamental stitching strips romanticized notions around narratives otherwise known in elegant stone carvings. Svay’s practice of resistance here is not only against past traditions of idealizing powerful figures but the ongoing catastrophes this provokes.
www.arndtartagency.com