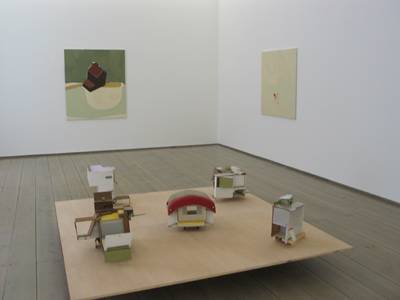 We are delighted to announce the beginning of our collaboration with Veron Urdarianu with his first solo exhbition at Arndt & Partner, Berlin.

In Veron Urdarianu’s paintings time seems to stand still. His architectural situations float in an undefined pictorial space. The muted colour appears like murky water in which no movement is possible. The silhouettes of houses, hills and angular elements appear in the pastel brown, green and ochre tones as if smothered, excluding any possibility of these places being inhabited. Abandoned and disconsolate, the places convey an eerie notion of deserted dwellings.

The crude graphic character of Urdarianu’s paintings derives from the artist’s background in architecturally oriented sculpture. To deal with sculpture involves three-dimensional space, which is why Urdarianu engages in a mystifying game with perspective on the picture surface. Foreground and background dissolve thanks to a juxtaposition of dense colour planes which allow no clear assignment of proximity or distance. Delicate incisions in the thickly applied layers of paint indicate structural elements, which lends the pictures a tangible character. They belong almost to the category of a relief, without however breaking the bounds of their pictorial space.

In their play on flatness the paintings are reminiscent of the attempts of the early abstract artists, such as Cézanne, de Chirico, or Malevich, who also drew on architectural motifs in order to fathom the possibilities of perspective. Apparently the depiction of buildings is particularly suited to allowing pictorial elements to hover in space as utopian constructs and conjuring up a gloomy atmosphere. For this is what Urdarianu is aiming at: he wishes to create a subdued isolating atmosphere, which exudes not clarity, but a bizarre melancholy – perhaps a relic of his Eastern European heritage.

In real space Urdarianu creates sculptures which come across as playful architectural models. Using everyday materials he cobbles together flexible arrangements, which are either reduced to single structural elements or represent buildings the size of dolls’ houses and which are often multifunctional: with the aid of hinges the forms can be surprisingly altered. As homage to the Bauhaus vision of the total work of art, Urdarianu combines sculpture and architecture in home-like entities in miniature form, to which he lends a painterly quality with the use of colour. DIY materials such as plywood or plastic are combined with found materials: the Bauhaus aesthetic is combined with the Ready-Made to produce knee-high containers, which on the one hand evoke disparate urban situations such as slums or suburban areas, and on the other hand could well be original contributions to an architectural competition. Through this brittle, artificial materiality and the reference to social phenomena the sculptures are fully situated in the present time.

The main characteristic of Urdarianu’s visions of buildings is loneliness. Uninhabited, they evoke an alienating atmosphere, as that of half-finished building sites or empty playgrounds. Man may well have defined space in structural terms and designed it for his daily use, yet his absence turns the function of such shelters into something absurd. A house without an occupant is superfluous. Since the observer projects the possibility of life into them, however, the empty rooms have an organic dimension which awakes a feeling of the uncanny. The pictures and the sculptures become still lifes in the truest sense of the word, in which a mysterious morbidity and at the same time an innocent playfulness are inherent.

With the house, Urdarianu is making reference to a major theme in art, which especially since the 1960s has been evoked again and again: from Dan Graham’s “Homes for America”, Gordon Matta-Clark’s brutal deconstructions of real buildings, to Bernd and Hiller Becher’s typified photos of facades, Ludgar Gerdes’ model buildings, Rachel Whiteread’s cast of a London suburban house, Manfred Pernice’s chipboard structures, Andrea Zittel’s trailer parades and Gregor Schneider’s “Haus UR”, the forms of human existence are constantly being redefined.

Veron Urdarianu was born in 1951 in Bucharest, where he began painting in the 1960s. In the 1970s he moved to The Netherlands. There he studied sculpture at the Gerrit Rietveld Academie in Amsterdam. His works were first shown at the beginning of the 1980s in the Netherlands. The first important exhibition of his work followed in 2005 within the context of a group show of the Goetz collection in Munich “Imagination Becomes Reality, Part II: Painting Surface Space”. The show at Arndt & Partner Berlin is his first solo exhibition in Germany.
www.arndtartagency.com