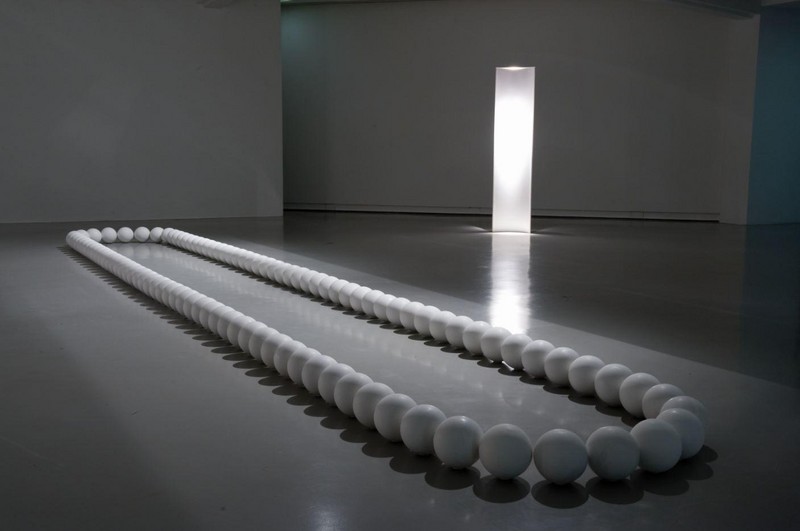 Three famous international stars can for the first time in Denmark be experienced together when ARoS opens its doors to an exhibition of impressive works by Yves Klein, James Byars and Anish Kapoor. The exhibition shows how three artists from different periods and working in different media have made their mark on the history of art by virtue of their work with colour and material. In Klein, Byars and Kapoor, colour is given a spiritual dimension, and all three artists make use of a minimal expression in which they employ a small number of devices to create an intense and complex experience.

INTERPLAY BETWEEN COLOUR AND MATERIAL
The French artist Yves Klein became famous at the end of the 1940s when, with the paintings he created solely in blue, he introduced new spatial and metaphysical dimensions into classical painting. He did this partly by allowing naked female bodies covered in blue pigment to roll on his canvases. In his chalk-white sculptures from the 1990s, the American artist James Lee Byars also allowed colour and material to play a central role. The heritage from both Yves Klein and James Lee Byars lives on today in art, and in particular they are fused in the work of the Indian-born British artist Anish Kapoor. With his sculptural masses of red wax, Kapoor moves between painting and sculpture, and in the same way as Klein and Byars achieved it, he is able to activate colour as an element creating form and movement as well as space. Most recently, Anish Kapoor created the official landmark of the Olympic Games in London, the Olympic tower, Orbit (2012).

The exhibition has been created in collaboration with MAMAC, Musée d’Art Moderne et d’Art Contemporain at Nice, which also on a former occasion acted in partnership with the museum in mounting the exhibition Robert Rauschenberg On and off the Wall in 2004.
www.aros.dk