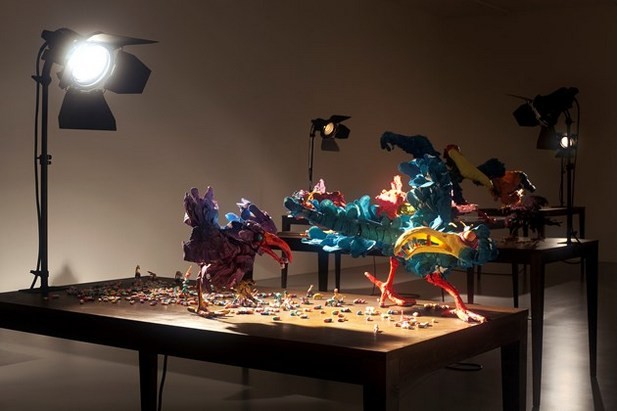 FLICKERS OF DAY AND NIGHT is the third exhibition in the series ARoS FOCUS // NEW NORDIC which focuses on young Nordic artists. Taking their starting point in especially Nathalie Djurberg’s (b. 1978) intensely personal fantasies and ideas, the artist couple strive to visualise the often less becoming aspects of the human psyche. They achieve this in integrated installations consisting of large modelled sculptures, video animations and suggestive music. Visual artist Nathalie Djurberg and musician Hans Berg (b. 1978) create a space in their works for frustration, angst, lust, violence and fantasy in a very private and symbolic manner.

SPACE 1
The first of the three installations shown at ARoS, A Thief Caught in the Act, 2015. It is a brand new work containing six wooden tables with colourful birds caught in the beam of a powerful spotlight in the act of stealing pills. The light goes on and off in specific sequences, so that when the light is switched on, the birds are lit up as if by a police searchlight. The birds1 expressions of fear, guilt and surprise become conspicuous, just as the colour intensity of their plumage is enhanced by the bright light.

SPACE 2
The other installation at the exhibition is The Gates of the Festival from 2014, which was shown last year at the Lisson Gallery in London. It is a neon work mounted in the ceiling, accompanied by music and three video projections. Neon squiggles on the ceiling are blinking (if not actually dancing) to the sound and rhythm of Hans Berg1s music. A video projection shows an animation of a big bird ”running” along the walls, followed by two wriggly animations. The animation is played in such a way that it appears to be running all over the room, round the viewer. The soft cosiness of the floor is an invitation to lie down on it, go with the flow of the music and watch the dancing neon while the bird flaps its wings and passes over you. This is your chance, like the artwork, to let go and relinquish control for a brief moment.

SPACE 3
The last installation of the exhibition – The Clearing, 2015 - resembles a garden packed with plants; shining oversize flowers grow up in bright Disney colours. The installation takes The Experiment, winner of the Silver Lion at the Venice Biennale in 2009, one step further. It features 162 shining flowers tall enough to hide a man on 11 rotating podiums, and placed among them are two video projections. The space has a hallucinative feeling. The dim room, the flowers emanating a Disneyish hysteria and the mystical eerie music evoke a ”granny doing acid” or a Garden of Eden gone wrong. The flowers are fine and simplified, but belong to a non-existent species, rather as if they had originally been part of a child’s drawing, blown up and all out of proportion; the flower as a well-known figure become strange and almost scary to us – they become unheimlich.
www.aros.dk