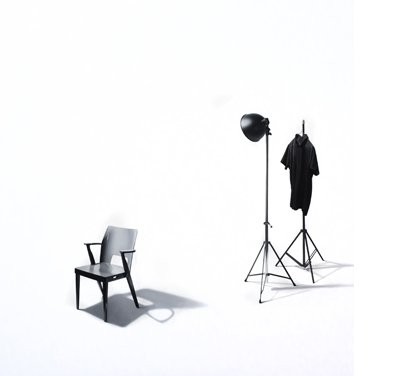 Gallery Nicola von Senger is pleased to present the first solo show in Switzerland of the artist Drago Persic. Bosnian born and Austrian raised, Persic’s work deals primarily with photographic elements and cinematic references. His paintings, existing at the border of the hyperreal and the unreal, express certain ambiguities, and only deliver indications in the form of empty objects placed in the midst of a monochrome surface. The pieces shown in his exhibitions can be read as parts of a story barely touched on by the artist and never fully explained.
Persic works with staged photographs as his master illustration. The arrangements produced are carefully illuminated with artificial light and captured with the camera; conventional objects, a curtain, a cloth or chair, are isolated by the artist and absolved from their regular functions. They become the protagonists in their own portraits just like the characters he draws. Rarely is there a hint of a spatial connection, as in the form of a lamp or section of parquet. Often this is completely absent and the freestanding objects seem to float on the canvas, which is coloured either black or white, a lack of perspective lending them a sculptural quality.
Through his pictures Persic leads us into a fragmentary world of silence and irritation. With his extremely precise implementation of black-and-white technique, referring to Grisaille painting, Persic’s works remind one of the paintings of the old masters. The minimal colour palette the artist uses is explained by his personal fascination with monochrome, its inscrutability, allowing him to focus on shade and to search for form. In the process the different nuances of the grey tones develop solely through the strength of the application of the paint.
At first sight the pictures seem easy to understand in their simplicity of composition, however, a notable complexity is soon disclosed. The viewer’s closer inspection reveals disturbances with which Persic questions the objectivity of photography and relativises it.
The mysterious mood of the works, combined with a peculiar melancholy that emanates from the scenes, is not only caused by the use of black-and-white; like the fragments of a dream which remain in one’s memory, identical objects appear again and again in his works and awaken the curiosity of the viewer. At the same time, trimmed angles and perspectives avoid a clear understanding of the motive of the picture. Such characteristics of building tension in a scene, famously used by Hitchcock, along with other filmic elements of the suspense genre in general, flow through Persic’s work.
Persic shifts time and space in his pictures, by isolating an object he freezes the moment and thus grabs the viewer’s attention. The artist plays with our nearly imperturbable faith in the authenticity of the shown; irritated and at the same time fascinated by the puzzling mood, we look for a solution to a story that seems apparently presented but, nevertheless, remains out of reach.