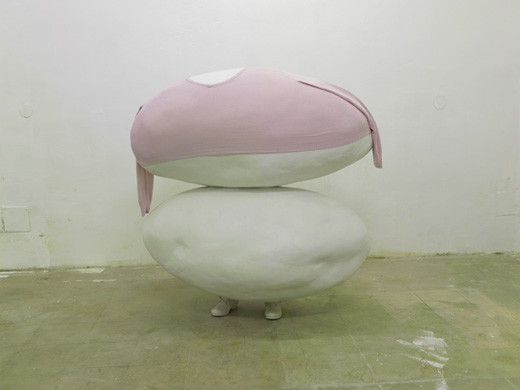 Concurrent to the exhibition at the Kunstmuseum St. Gallen, Gallery Nicola von Senger is pleased to present new works by Erwin Wurm.
Born in 1954 and trained as a sculptor, Wurm has already produced an impressive and successful artistic oeuvre placing him among the ranks of the most important contemporary artists internationally. Through his continuous experimentation with objects, photos, performance, drawings and video Wurm stretches and reshapes the contemporary understanding of sculpture while remaining true to his origin. His examinations of form, time, volume and virtuality are grounded within the traditional definitions of sculpture.
Wurm takes a sceptical approach to tradition and presents us with new interpretations and multifaceted analyses of the essence of everyday objects and their appearance. His prevailing interest is the ordinary – anything can be transformed into art – and it is this concept which serves as the basis for the main themes in his work, namely, investigations and observations of the ‘condition humaine’ or man’s fate.
His work is influenced by an unconventional understanding of reality and therefore often seems surrealistic even though it is firmly planted in the here and now. Potatoes suddenly grow legs, people blow up or animals swallow strange things - the unexpected relationship with everyday objects leads his sculpture to subtly threaten and unsettle our normality. It is exactly this synthesis which makes his creations so easily and intuitively understood as they simultaneously disturb and attract the viewer.
With Leaning Car (working titel) Wurm’s slanted view of our society drives him to disrupt the steady chain of production in order to fabricate an inclined automobile – a motionless sculpture expressing both unrest and motion. In Mental Brown Wurm instantly triggers extensive questions when he humanises objects by clothing canvases in t-shirts: Does it fit? What’s hidden beneath?
Wurm possesses the ability to condense a sequence of events and then convey it with reduced objectivity as seen in his house series. The typical function of a house – to make one feel safe – is pushed ad absurdum through Wurm’s deformed structure. A blown up and melted structure replaces a sprawled landscape; constructions twist and writhe until Bungalow a potato shaped chunk covered with a woollen blanket, is transformed into a homey shelter.
The artist doesn’t turn the world upside down, rather he tilts it. The composition of the images in Energy Station leads one to believe that the station is resting on its roof with the ground merely attached to the foundation. With subtle irony and a touch of sarcastic wit, Erwin Wurm scrutinizes the commonly accepted notions defining our world and imposes upon them his own personal perceptions provoking us to marvel, to laugh and to think. Ultimately, his tongue-in-cheek artworks laughingly help us come to grips with life.
Rémi Jaccard, February 2008
Translation: Elaine Keller
www.nicolavonsenger.com