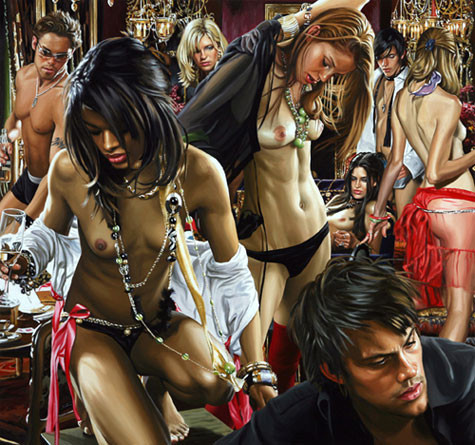 Galerie Nicola von Senger is pleased to present Terry Rodgers’ first solo show in Switzerland. The gallery already showed Rodgers’ work in a group show titled Sweet Ecstasy in the spring of 2006. With the recent surge of interest in figurative painting, Rodgers (*1947 Newark, NJ) has made a considerable impact on the international art scene. His work was recently included in a large exhibition on the return to figuration in contemporary painting which was shown at the Kunsthalle der Hypo-Kulturstiftung, Munich, Museum Franz Gertsch, Burgdorf, and the Kunsthal Rotterdam.
The lush interiors and the finely toned, semi-nude bodies that populate Terry Rodgers’ canvases mirror the pop gloss of film and fashion photography in their polished realism whereas their careful composition reminds one of opulent Baroque paintings. While the paintings are rich in color and detail, they purposely lack an emotional exuberance. Those portrayed appear to be consuming and consumed by the luxe, calme et volupté of the moneyed leisure class in the age of a very mainstream celebration of decadence, but their subdued gazes into an undefined void are vague and reveal neither pleasure nor pain.
Contrary to the visual context, the figures seem remarkably absent. While it seems reasonable to suspect causes from post-coital vapidity to post cocaine anhedonia, from boredom to affluent neglect, Rodgers intentionally avoids pinpointing a specific cause and leaves the scene largely ambiguous. He details a condition without critique or approval, a condition that may be anything between existential despair and misery in the face of luxury. Whether this state is self-induced or the result of a cultural predilection favoring false idols, the characters are lost because, despite all signs of fulfillment being present, their desires could not be satisfied. They slip away and perpetuate the characters’ confused struggle for ephemeral pleasures.
The nihilistic tendency dominating the mood of the paintings evokes “a subtly disproportionate, disjointed world where life is elsewhere, waiting to happen” (Lilly Wei). This static quality, the snapshot character without past or future gives the paintings a resemblance to cinematic stills. This resemblance is reinforced by the dense compositions on one hand, framing and giving depth to a scene, and the play on the desire of a spectator on the other. The spectator, whose desire will be no more satisfied than the characters’, is at the fringe of a fiction posing as reality, where the absence of meaning and the desire for it reach from one to the other.
Gregor Staiger, July 2007