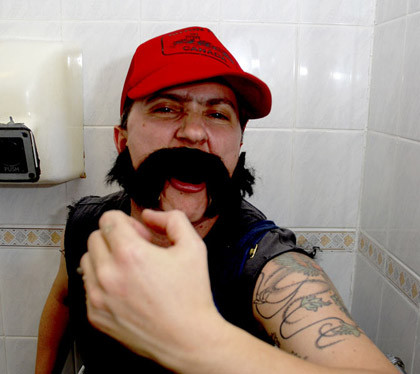 For a while (maybe a pirate's lifetime) this table is occupied entirely by its purpose as a ship, when play concludes it returns to its basic table form. But for those who encountered the table in its pirate ship form, it will never be the same again. Something has changed, a potential has been discovered, a feeling experienced, a possibility revealed.

TAZ is a series of five commissions with artists Lawrence Abu Hamdan, Ceri Buck, Sarah Cole, Lucille Power and Charlotte Prodger based on the concept of the Temporary Autonomous Zone as presented by Pete King at the Play Education 2007 conference.

Taking Play theory as its starting point TAZ began with a training programme in which the commissioned artists were introduced to theories of the 16 play types, the compensatory play space (an artificial environment created by Playworkers to exaggerate opportunities for play diversity) and the role of the play worker. Using this Play model to interpret their role as artists within a social commissioning agenda, their invitation was to develop an idea, to experiment within their practice and to explore how their practice could be opened up through collaboration to develop a temporary community.

The community, compensatory space or Temporary Autonomous Zone then became a way of looking at the process of making work, of collaborating, and of extending practice to include other people. TAZ is not concerned with an end product or an outcome, but with what happens within its space, place or timeframe; with the dialogues generated, the problems encountered, the changes made and the moments when the artist loses control of the process.

This project was supported by Arts Council England, Artangel International Circle, Special Angels and The Company of Angels
www.artangel.org.uk