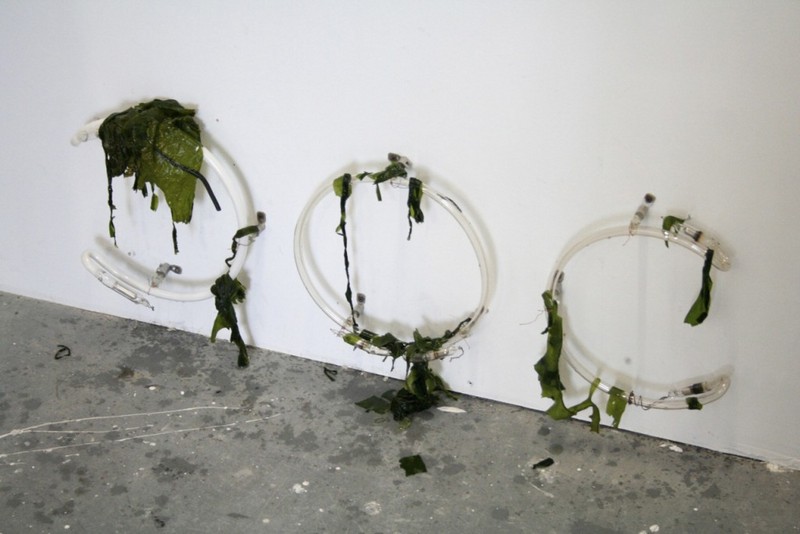 Art: Concept has the pleasure of presenting Induction Procedure, proposed by Gilles Renaud, this exhibition brings four New-York based Canadian artists together in Paris for the first time.
What brings these four young artists together, apart from a certain friendship, is an aesthetic vocabulary based on the awareness of objects and - even more - on form and composition. All manufactured objects relate to utilitarian, social, political or economical purposes. For instance, Bookshelf by Aaron Aujla were first conceived as utilitarian objects: a shelf reduced to its formal/functional concept defining itself as a purely useful object. Aaron Aujla dematerializes this shelf and takes it out of its usual context in a sort of alliance between the work’s subjectivity as artifact and its objectiveness as merely practical object. The interaction with the space that hosts it - a gallery - allows this object to free itself from its formal constraints and to express its own purest and very distinct aesthetic essence. The object thus becomes obsolete and makes way to a work of art as such, creating a gap to be overcome by the spectator and leading from the initial object to a final creation entirely purged of its initial purpose. The preponderance with which finished articles impose themselves within the works of these four artists, as well as the presence of essential and raw materials as initial components of manufactured object, is operated and fashioned in an almost sensual way by Elaine Cameron-Weir. Even though her aluminum plates are handcrafted and melted traditionally; they are the result of a jumble of industrial electric wires reduced to its purest form; both on aesthetic and conceptual levels. Once they have become rectangular plates with bumpy surfaces reminiscent of lunar craters or of the surface of planets, far from their initial purpose, we experience a misleading of our vision, because what we see brings us far from our everyday reality with its laws of nature. As for Ben Schumacher’s cashmere pieces, their conceptual approach is more “front end”. The material employed undergoes a specific transformation that brings it, once again, far from its original significance. By laser-etching pattern-designs issued from the textile industry onto a material held particularly dear by the same industry, we are forced to consider the material from a new angle. His works play with the traditional codes of painterly representation by making a simulation of high-technology pattern creation. Ryan Foerster prefers natural oxidations and alterings to high-tech proceedings. A very powerful visual force that disrupts the spectator’s eye emanates from his abstract mobile pieces.
The works of these four artists are made with elements of our everyday life that we can single out and recognize, but interwoven or circumvented in such a powerful way that we find ourselves completely estranged from it. Induction Procedure is an experience of assimilation, the conscientious digestion of an action of estrangement from the necessities that tend to rule our acts and our relation to the world. It allows us to discover the parallel reality of a world that could be perceived in its roughest and most basic terms, stripped of the mediation processes and of all the semantic levels that are usually imposed upon us. Therefore, more than a radical estrangement from the real world, this exhibition could be seen as a re-discovery of reality as it exists outside the conventions imposed by society and human ways of life.
A.B // Translation Frieda Schumann

Born in 1985 in the Province of Alberta, Elaine Cameron-Weir lives and works in New York. she graduated from the Alberta College of Art and Design and achieved a MFA from the Univerity of New York. Personal Exhibitions: galerie Rodolphe Janssen, Bruxelles (2013); Venus Over The Sun, Desaga, Cologne; Not known to be used by any form of life, RAMIKEN, NY (2012). Collectives exhibitions : WEIGHTS & MEASURES, Eleven Rivington, NY; Creature From the Blue Lagoon, Bridgehampton; STRAIGHT UP, Family Business, NY (2012)