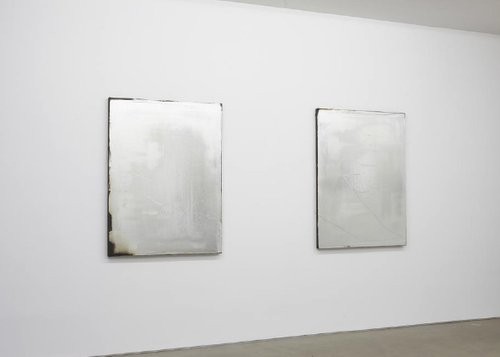 Art : Concept has the pleasure to announce the first personal exhibition of artist Jacob Kassay.
His practice includes painting, works on paper, mixed media, film, installation and collaborative projects. However, on the occasion of the current show, this New York artist will present a series of abstract paintings with silver metallic surfaces.
Jacob Kassay’s pieces play, both literally and figuratively, with notions of opacity, reflection and transfer. His monochromes are chemically produced by means of an industrial technique – electro-plated in silver. They give themselves off to the spectator thanks to the interactive perceptibility that operates when he places himself in front of them to perceive his own faint reflection.
The smooth and shiny surface of these paintings is somehow temporarily altered by the spectator’s passage. Far from being a loss, this alteration is to be understood in the sense of “musical inflection”, a shifting of the light level and source that influences the work much in the same way as a sharp or a flat could modify the pitch of a musical note. The juxtaposition of an ensemble of paintings is as important as the light-reflection and opaque denseness of the reflected environment. Any variation of the perception of the painterly surface is to be considered as inherent to this artistic project. On this account, the artist carefully keeps control of their reproductions and makes sure that published images do not convey the image of simple homogeneous and silver monochrome-paintings. He refuses front-views of any single pieces.
Kassay’s paintings create a space-continuum in which the blurred and opaque reflections convey illusions of depth. Beyond the impact created by the light that alters any painting’s surface, we find that the importance granted to the space between the spectator and the inherent flatness of the canvas turns into a rebounding reference to the immaterial and conceptual sides of painting. Could this be the calling forth of immateriality as previously evoked by Yves Klein’s IKB* monochrome-paintings ? Is the artist trying to inscribe his work in the historical tradition that consists in conceiving a painting as a window to be opened on the world and its possible representation? Or is he rather making references to the use of mirrors in Arte Povera and Minimal Art (Smithson, Pistoletto and Morris) ?
Kassay deliberately cultivates opacity of reflection. The paradoxical effect of these painterly-objects is all based on the impossibility of operating a trans-historical synthesis and implicitly evokes the modernist and maybe absurd desire to put an end to classicism by producing monochromes. The artist has reached painting through photography. Expressions such as : « duration », « instantaneousness of light exposure », « image-production », « perpetual development »or « depth of focal fields » are terms that can be used to interpret his work, and they all come from the world of photography.
Recalling the archaic photographic techniques of the end of the 19th Century, the technical process used for the production of these silver images seems to involve a certain amount of nostalgia. Even though these painting are produced in an industrial way, Kassay has somehow managed to divert the primary function of photography, but because each painting offers a different formal result, the process is no longer centered on reproduction.
By handing his artistic gesture over to an industrial process, creating a distance between his work and the nostalgia that was seemingly implied by the use of an obsolete technique, even the mock-expressionistic texture of the canvas’s surface is evacuated. The artist merely operates a transfer from one medium to the other.
The exhibition is built around multiple considerations on illusions created by serial production and the impossibility to operate exact reproductions; defining the loss involved both in the transfer-processes and in any interpretative attempt. As an extension of such visual proposals, a performance and collaborative project between Jacob Kassay and Rhys Chatham will be part of the exhibition.
Caroline Soyez-Petithomme, translated by Frieda Schumann
www.galerieartconcept.com