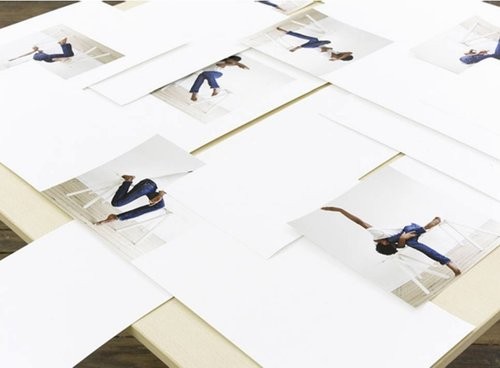 Jimmy Robert works in the fields of performance, installation work, dance, theatre as well as photography. Following a continuous but not linear flowing process, his works are interrogations on the borders of language and representation.

His formal vocabulary is composed of plain wood structures, paper stacks and images. A performance, placing the artist’s or an interpreter’s body at the centre, is sometimes added to the device. Some of the constituting images and aesthetic elements are recurrent and turn up from one piece to the other with slight or important variations. Both sculptures and installations can sometimes be turned by the artist into performance-stages. Without ever letting the work fall into anarchic production, conceptual flexibility and an evolving character are foremost in Jimmy Robert’s artistic practice. Profusion is structured yet left loose. Improvisation is seen as the fundamental part of a creative-process that allows the artist to express himself in a personal way, while nevertheless avoiding to ever slip into intimacy.

Jimmy Robert turns from one artistic discipline to the other without any hang-up, managing to turn this lack of specialization into a token both of freedom and of lightness. He cultivates ambivalence by reconsidering the amateur’s status and comparing it to the artist’s position. For instance, despite his passionate interest for dance he doesn’t define himself as a dancer, and neither does he aspire to become one, even though dance is a recurrent source of inspiration in his work. The status of unqualified dancer, totally claimed by the artist, is comparable to the position of an amateur pointing at a critical distancing both inside and outside the discipline.

This taste for duality is one of the constitutive principles of Jimmy Robert’s work. It applies both to the intermingling of different artistic disciplines and to the juxtaposition of different styles and ranges.

With a little accent of irony, the invitation card implies both critical distancing and emancipation from styles: in a burlesque situation the artist strikes a mannerist pose to join a group of sculpted cherubs in a farandole that matches elegance and gaucherie. The title: Le Bonheur d’être dupe* is to be considered as “the expression of an acknowledgement”, says the artist.

Jimmy Robert plays on constant focusing variations (from internal to external to omniscient points of views), and on many narrative techniques transposed from literature into his artistic practice. This strategy contributes as much to the enrichment of a relation to the body as subject and means of expression as to a critical relation to photography.

According to Jimmy Robert, the human body is at once symbol of mankind, object, idea and simple shape. It is the central element of the present installation, organized in two parts. The separation between the two rooms points at the separation inside a conceptual duet dance, idealized but impossible, between a dancer (Shiho Ishihara) and a non-dancer (Jimmy Robert). On the tracks of the relation between a drawing and its model, caught between photography and sculpture, their dance becomes drawing in space: the recording of a transition from body movement to static object. The virtual choreography outlined by the exhibition is also akin to the logics of a relation between architecture and scale drawings.

This installation could be used as background for the respective performances of the two actors by means of photographs, placed on a table that could be seen as a stage, to both document and relate. The first table was conceived and realized in Japan on occasion of Jimmy Robert’s exhibition at CCA Kitakyushu. The one which we can see here is a new and partial version in the form of independent modules. It is the collaboration between Shiho Ishihara (Min Tanaka’s pupil**), which consists in deconstructing Jeff Wall’s 1993 work called A sudden gust of wind (after Hokusai). The different transformations of the image and movements are here to underline the limits of photographic representation.

As photographic support, paper somehow implies its own performative rules dictated by its intrinsic physical properties. By following this material’s structural logic, the images disposed on the table of the “Test” room present a series of poses that are spontaneous yet limited by the artist’s physical abilities.

These photographs are portraits that never show the artist’s face in a strategy of dissimulation made to contribute to the release of more generic images and meant to counterbalance any hints of intimacy, drama and theatrical effects that may seem to emanate from the complex sculptural positions.

All elements - framed images, photographs and objects – gathered on the two tables and in the surrounding space constitute both the action and its environment. Comparable to theatre-curtains, they are artifacts meant to reveal what is hidden, but also conceal and generate suspense.

Conceived in collaboration with Min Tanaka

This is incomplete now,

Why do I need a “form” in order to dance, I wonder.

Obviously, “form” is a necessary thing in life.

The form I want to retrieve is not actually the “form” itself, but the physical body which realizes the “form”.

In the performance of time, Is it possible - even if only for a moment - that my deceit becomes genuine on the spot?

I yearn to dream, a little bit, in the middle of my never-ending journey.


* Roughly translatable as “The pleasure of being deceived (Duet)”

** Min Tanaka was very close to Tatsumi Hijikata one of the pioneers of Butoh with Kazuo Ohno.
www.galerieartconcept.com