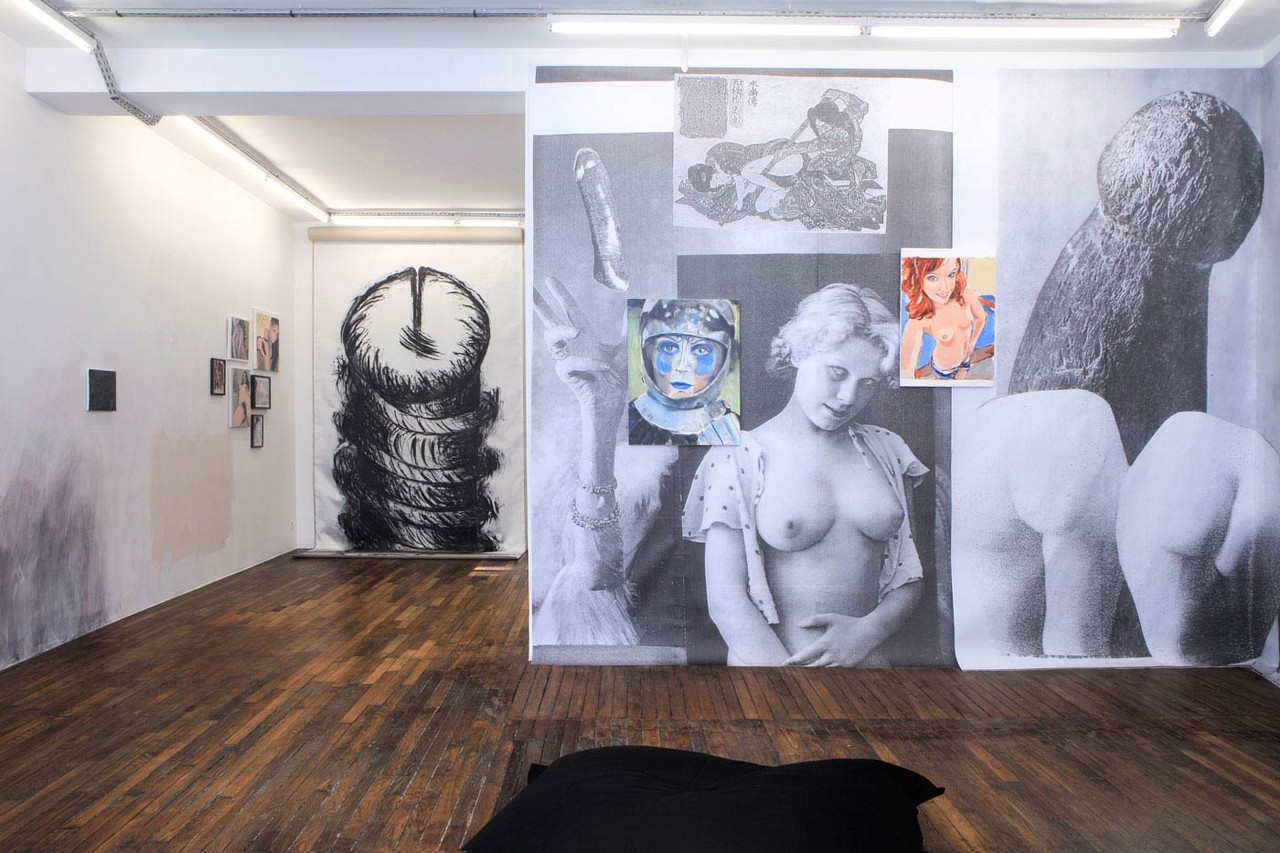 The exhibition title La Femme de trente ans (“A Woman of Thirty”) is just an amused wink at the eponymous work by Balzac, a way of placing the exhibition under the auspices of a novel that depicts (from man’s point of view) the not enviable life course of a woman in the 19th century after her thirtieth year. The title of the novel is a contradiction in itself, since it evokes a “type”, “the” thirty-year-old woman, whereas it extends to the successive stages of a woman’s life through different ages and that it was also initially split into separate novellas, featuring several characters, not just one single woman.

In cinema, probably we would call it a MacGuffin, a pretext to link a few works that share some iconographic aspects, symbols and questions that remain constant, just as the sexual and gendered archetypes to which they refer. Each work is more or less explicitly sexual, erotic or pornographic. Their juxtaposition offers multiple and trans-generational points of view on the subject, and it is not without humour and without a certain critical distance that the title La Femme de trente ans comes to play the role of ambiguous and somewhat enigmatic binder - binding and not linking with reference to what materially constitutes painting and - by extension or contamination from one medium to the other – what constitutes links between painting and photographic images, filmed and captured to make them one’s own.

The redundancy of these representations of sex, their freedom of access (in the broad sense, as obvious echo to its continuous availability on the Internet) and their absurdity in the present context of a gallery willingly turns the topic to exhaustion and evacuates the subject in favour of a shift from figuration to abstraction, or one might even say to liquefaction as the brightly coloured and sensual geometric shapes drawn by Tatiana Rihs seem to melt one after the other. As counterpoint: The grandiloquent screws drawn by Judith Bernstein arise, as well as the otherwise phallic sculptures by the young Belgian artist Hedwig Houben, which she comments from a lying position in her 2014 filmed performance The Good, the Bad, the Happy, the Sad.

All these things are made to stand out against a background of black and white all-over collages by Marvin Gaye Chetwynd. Like a crazy cardboard decor or a bass line (which could be that of John Waters’s Female Trouble, on whose soundtrack Divine, full of lightness, sings the cynical refrain “I’ve got lots of problems ... “). Chetwynd’s works homogenize and level off this collection of works that remains formally very heterogeneous, but without smoothing out the ambiguous and queer accents of Jean-Luc Blanc’s or Lothar Hempel’s works.

From both sides of the gallery the pornographic and erotic paintings by Celia Hempton and Walter Robinson also interact. Directly inspired by images gleaned from live chats (Chatroulette for example) found on photography-sites for the first and on Internet streaming for the second. Some will no doubt say that these paintings (especially Robinson’s) by the choice of techniques and subject obviously flirt with bad taste, but the contradiction that engenders them largely prevails here. As figurative representations they attract while playing on the banality of massively circulating images, conceived without interiority or depth, and on which it is a priori not necessary to dwell since the continuous scrolling logic which is linked to their visual experience exhausts them before the visitor is even ready to look at them. Described in these terms, the conceptual strategies of these two artists, although very distinct one from the other, may seem to refer to pop but the reality they evoke is more subtle: These works do not borrow so much from codes of “traditional” advertising, or should we say “pre-Internet” imagery, they are more interested in the relatively new aesthetics of self-presentation (whether purely fictitious and consumerist or not) centered on the exacerbation of sexuality and the aesthetics of self-promotion through sex whether voluntary, liberating, simulated or forced. These paintings, whose subject can be absorbed at first glance, are images of images and hold a strange magnifying glass up to the exhibition of bodies, sex and to symbols that are like pop-up displays, popping up and then immediately closing, or, as the margins of our internet mail-boxes or other sites, overloaded with ads intended to appeal to consumption “of all kinds”